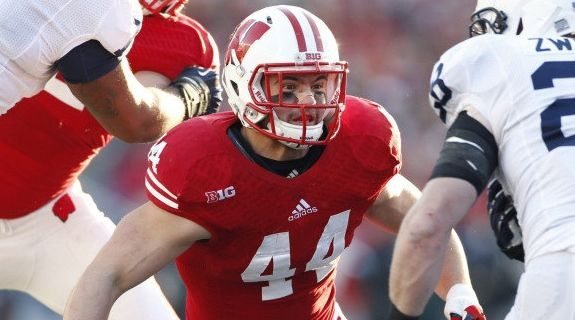 MADISON, Wis. — For months, Wisconsin head coach Gary Andersen has repeatedly described the leader of his defense as “the best linebacker in America.”

Chris Borland’s play once again put him in that discussion this season and, on Wednesday, the Badgers senior was recognized as one of the nation’s best at his position. Borland was named first-team All-America by the Football Writers Association of America, joining Alabama’s C.J. Mosley and Buffalo’s Khalil Mack at linebacker.

The Nagurski-Woodson Big Ten Defensive Player of the Year, Borland was a consensus first-team All-Big Ten selection and was also named the league’s Butkus-Fitzgerald Linebacker of the Year.

Borland finished the regular season ranked third in the Big Ten at 9.3 tackles per game. He leads the Badgers with 102 total tackles — 40 more than UW’s second-leading tackler. He also recorded 8.5 tackles for loss and four sacks.

He matched the Big Ten record with the 14th forced fumble of his career and ranks second in UW history with eight fumble recoveries.

Borland’s 102 tackles were the fifth-most of any Big Ten player despite the fact that Borland missed an entire game — and three quarters of another — due to injury.

He is just the fifth player in Wisconsin history to record three 100-tackle seasons, and the first since Pete Monty accomplished the feat from 1994-96. Borland’s 410 career tackles rank him sixth all-time at Wisconsin and No. 2 among active FBS players.

His 50.0 career tackles for loss rank 10th among active players and fourth in UW history.

With double-digit tackles in each of his last six full games, Borland averaged 11.8 stops and 1.0 TFLs per contest in that span. He finished the regular season with seven games in which he recorded at least 10 tackles.

Borland’s efforts have anchored a UW defense that ranks No. 2 in the league in both scoring defense (14.8 points per game) and total defense (294.0 yards per game). Wisconsin ranks sixth nationally in both categories.

Jameis Winston To Miss 1st Half Against Clemson