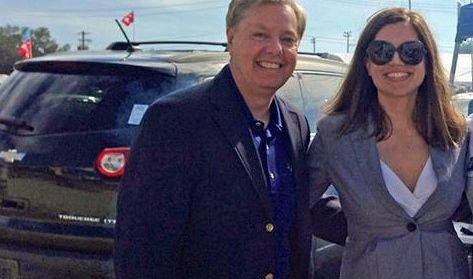 So this is pretty funny …

U.S. Sen. Lindsey Graham and one of his 2014 primary challengers, Nancy Mace, posed for a picture together at last weekend’s Citadel homecoming celebration.

Anyway, the snap was quickly posted to the website BenSwann.com, which has been aggressively promoting the campaign of S.C. Sen. Lee Bright (R-Spartanburg) – another of Graham’s primary challengers.

“Perhaps Mace is attempting to end the mud-slinging,” the website notes. “Risky, but intriguing move by Mace.”

Our guess is both candidates were just being civil … and there will be plenty of mud-slinging to come.

Justin Amash Is Coming To SC