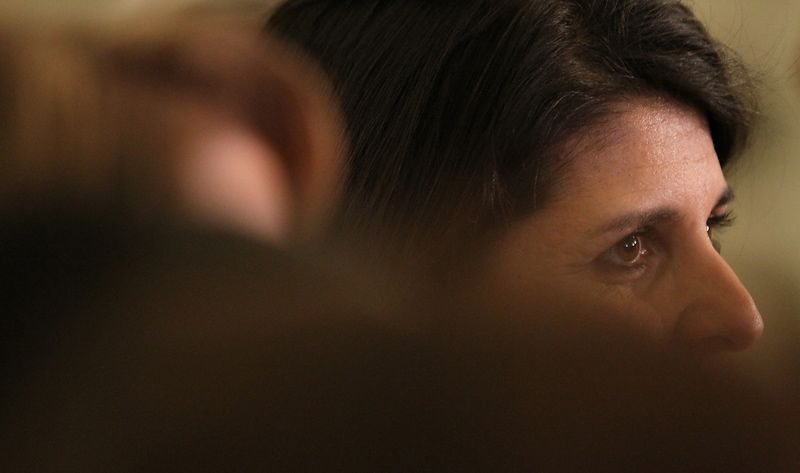 S.C. Gov. Nikki Haley is the focus of an expansive new national story published this week by Bloomberg reporter Toluse Olorunnipa (who to our knowledge is not a food critic).

On the whole, Olorunnipa’s Bloomberg piece is pretty fair. It delves into several of Haley’s scandals while permitting her surrogates to tout her talking points (Haley declined to be interviewed for the piece).

“As she’s tried to stay focused on job creation, opponents have used ethics charges and management mishaps as openings to knock her off track,” Olorunnipa reports. “As the attacks intensified, Haley’s voter-approval rating remained less than 50 percent as recently as April.”

The most curious line in the Bloomberg story? A quote from Haley’s spokesman Rob Godfrey, who referred to the governor’s administration as “the most transparent and open” in state history.

Just last week Haley was busted banning the press from a meeting of “Republican” governors in Charleston, S.C. – the latest example of her administration’s decidedly anti-transparent behavior.

“Far from opening the doors on the Palmetto State’s secretive, corrupt government – Haley’s administration has made things demonstrably worse,” we wrote recently.

Haley also failed to disclose more than $40,000 she received from a company doing business before the state.

Since taking office, Haley has been busted convening off-the-record public meetings, withholding relevant emails under the state’s Freedom of Information Act (FOIA) and even deleting emails – although she claims to have stopped the latter abuse.

Under Haley’s “leadership,” South Carolina ranks dead last in the nation in access to public documents – and recently received an “F” for its transparency regarding academic funding.

Does that sound like the “most transparent and open” administration in state history to you?

Lloyd And Harry Are Back

Nikki Haley has the most opaque administration in state history.
Again, Nikki Haley only cares about Nikki Haley!

I feel sorry for the children. Had a friend whose mother was mentally ill, very sad.

Honestly, would not let her enter my house without first hiding the silverware.

If so, he should get custody of the children.

Maybe Michael can find a nice girl, like Will did.

Of course not, she’s his meal ticket.

Maybe he can restart his “barter” business. You know, National Barter Co. that was located at 5483 Sunset Blvd. Ste. B Lexington, SC. Convenient to Exotica, which had the address of 5483 Sunset Blvd.

If Godfrey said it then it must be so. Let’s use that statement in campaign literature. We can flash the quote on the TV screen and attribute it to Bloomberg for credibility. Republican voters in SC will lap it up. Nice! Point Haley Campaign!!

She’s transparent, but not in the way Godfrey meant.

Haley is as transparent as the Broad River

And just about as wide

In Nikki’s defense, the blogger who wrote that she was 190 pounds should be beaten. Yes, she has put on quite a few pounds, but she is most likely between 165 and 170 pounds and a size 14. Hopefully she can push away the plate and lay down the fork sooner than later.

Still wears a training bra. I’d hit her, though.

She’s so transparent, if you look through one ear, you can see daylight!!

Did U really say this…?

“…A quote from Haley’s spokesman Rob Godfrey, who referred to the governor’s administration as “the most transparent and open” in state history…”

Well Rob, if the contributions and “open-ness” that you and Nikki Haley both display here on Fitsnews in this comment section is any indicator….YOUR fibbing..!!

Rob, do you not think that posting information to the comment section of this website is an example of “transparency”..?

Mr. Godfrey, as a concerned taxpayer and Information specialist for SPAWAR Atlantic in Charleston SC, I can tell you point blank and in the most accountable and transparent manner that the outright overthrow of South Carolina government is upon us.

I will give you an example……..( I dare you to think about this…). Mr. Godfrey, we highly wager that everyone in this comment section has gone into a doctor’s office or dentist’s office and have been asked to fill out their information while sitting in the waiting room. How about you, Rob..? Well, what if your phone is used to make this obsolete..!? What if every patient were PAID to do it..? What if every worker in the offices knew how much their pay would increase due to the savings from all of the money spent on paper filing..? What if every doctor or dentist knew how it would all switch in less than 3 months from reading this website’s “comment section”..!?

Rob, just for fun….(really, just for fun) pick up your phone and give Bobby Harrell a call and ask him if he has read this article and comment section. Tell him SPAWAR Atlantic says……”Hello” very transparently..!

Rob, when is the LAST TIME you have asked Nikki to call Wil Folks about a “news release”….?

SPAWAR…Space and Naval Warfare Command. If you think the Navy left town when they closed the base and shipyard in 1994, think again. Seventy-four percent of SPAWAR employees are engineers who work on some of the most sophisticated equipment in the world. This is a a very big deal, like war on global terror deal.

Pathological lying by the Governor’s Office.

Is Rob Godfrey smoking meth, or whatever meth-heads do? I think that Richland County Sheriff Leon Lott should investigate the State House to see if they are operating a meth lab. Certainly can’t depend on the Columbia Police Department to investigate anything.

My God, there is nothing the paid politicos will say. Nothing.