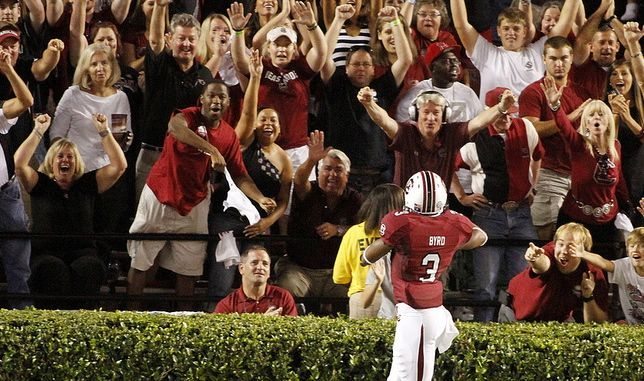 Kickoff of the University of South Carolina’s 2013 football season is less than ten days away, and while Gamecock head coach Steve Spurrier is doing his best to downplay expectations … it isn’t really working.

After back-to-back 11-win seasons and Top Ten finishes (both firsts for this historically mediocre program), USC enters 2013 with its highest ever preseason ranking (No. 6, according to the Associated Press) – and arguably the greatest player to ever don the garnet and black, Heisman Trophy candidate Jadeveon Clowney.

Assuming you’re not pumped already, check out this amazing video from Justin King …

Unlike many of King’s earlier videos, this clip makes extensive use of still shots … which the producer creatively moves against backgrounds and adorns with special effects. The coolest part of the video (in our opinion)? The treatment King gives Clowney’s sensational hit against Michigan running back Vincent Smith in the 2013 Outback Bowl.

USC opens its 2013 campaign next Thursday at home against the University of North Carolina. Kickoff is set for 6:00 p.m. EDT, with ESPN televising the game nationally.