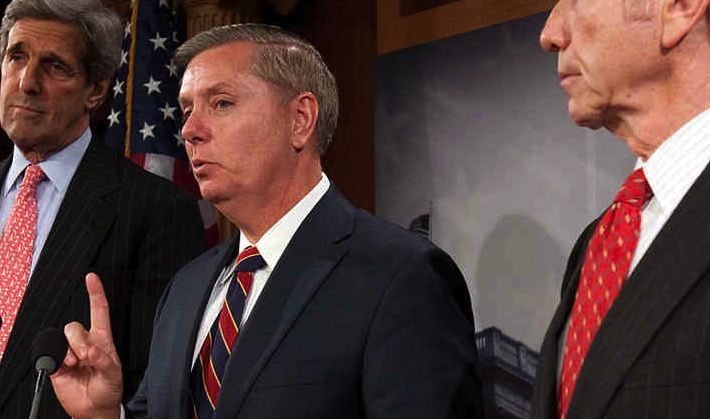 U.S. Sen. Lindsey Graham (RINO-S.C.) says he’s going to keep being a “fiscal conservative” and a “conservative like Ronald Reagan” as his 2014 reelection bid heats up.

“I’m going to keep being a social and fiscal conservative that focuses on our national security, takes care of interests at home, like the Port of Charleston, working with my state officials, and be a conservative like Ronald Reagan who will sit down with a Tip O’Neill to solve Americans’ problems,” Graham told Candy Crowley, CNN’s chief political correspondent.

Graham’s statement – which is pretty astounding considering his left-of-center voting record – came in response to comments made by Charleston businesswoman Nancy Mace, the first woman to graduate from The Citadel military college. Mace is running against Graham in the 2014 GOP primary for the U.S. Senate seat he has held since 2003.

“I grew up during the Reagan years,” Mace said in announcing her candidacy. “I believe our fortieth president understood what being an American was all about. He was proud, resolute, and he was an eternal optimist. Our friends knew he would be steadfast and our enemies respected him. President Reagan helped regain our national pride, but he also left us with a powerful warning. He said, ’Freedom is never more than a generation away from extinction.’ He said ‘we must fight for it, protect it, and defend it.’ I think those words ring true now more than ever.”

Those words were a direct shot at Graham – who has embraced the federal government’s massive domestic spying initiative.

Frankly, it is shocking to hear Graham refer to himself as a “conservative.” He has backed numerous tax hikes and spending increases, supported both of U.S. President Barack Obama’s liberal Supreme Court justices and is the chief proponent of our nation’s disastrous interventionist foreign policy. Not only that, he was the only “Republican” in the entire U.S. Congress to support Obama’s proposed energy tax hike.

“When a politician arrogantly ignores the people he represents at the behest of deep pocketed outsiders they must be thrown out of office,” says a spokesman for one of the political action committees aligning against Graham. “Lindsey Graham is the poster child for this kind of big government manipulation.”

We agree … which is why it’s laughable to hear him self-identify as a “conservative.”