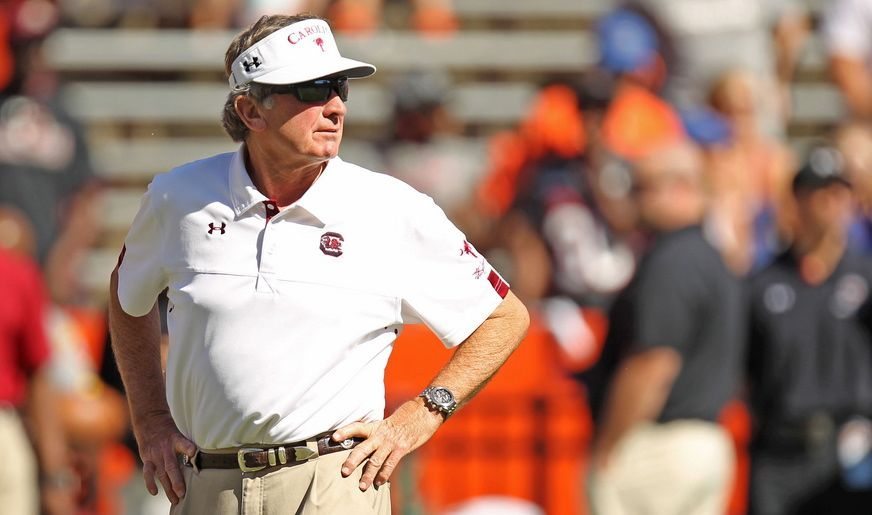 Following the two-hour workout in helmets and shorts, head coach Steve Spurrier pronounced the practice as “just so-so. It wasn’t anything special,” said Coach Spurrier, who is beginning his ninth season in Columbia. “Usually after the first one I always talk about how fast the team is. The team is in good shape. There’s no question our strength coaching staff has done a super job with them throughout the summer. We’ve got a ways to go. It wasn’t anything spectacular. Nothing special happened. We’ve got a ways to go and we need a lot of practice.”

A pair of sophomores, wide receiver Shaq Roland and tight end Jerell Adams, were absent from the first workout. “Shaq and Jerell were academically out tonight. Hopefully they can learn to go to class better and they’ll be here tomorrow night,” said Coach Spurrier.

Another good crowd was on hand to watch on a beautiful evening in the Palmetto State. “I figured there would be a good crowd,” noted Coach Spurrier. “We’re rated the highest preseason ever, so there’s a little enthusiasm. Hopefully we can live up to it.”

Expectations are high heading into this season. “It’s been very similar to the last three years,” noted Spurrier, the winningest coach in school history. “You want your expectations up there. You want the guys to expect to have a good team. We’ll be very disappointed if we don’t. But we can have a disappointing team if we don’t really prepare and get ready to play everybody. We’ll try to do that.”

In other news, redshirt freshman Kelvin Rainey has moved back to tight end after playing linebacker in the spring. He played tight end as a true freshman last fall. He is now wearing number 15. Walk-on quarterback Perry Orth is now donning number 10.

(Editor’s Note: The above communication is a news release from the University of South Carolina and does not necessarily reflect the editorial position of FITSNews.com. To submit your letter, news release, email blast, media advisory or issues statement for publication,click here).