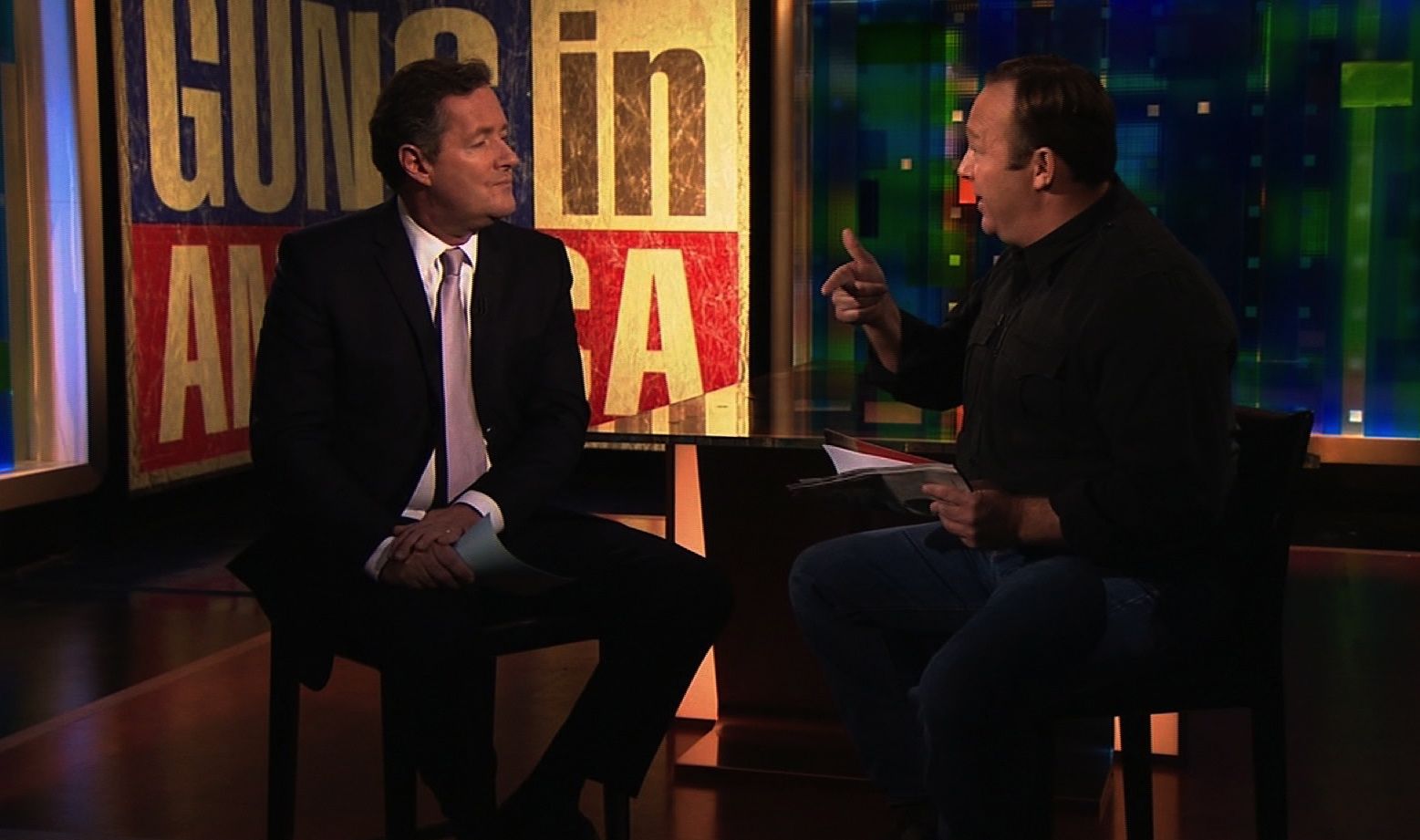 PIERS MORGAN, ALEX JONES AND THE “KOOKIFICATION” OF LIBERTARIAN THOUGHT

By Megan Jones || In the weeks since last month’s tragic mass shooting at Sandy Hook Elementary School, the noise on both sides of the gun control debate has become deafening. One of the loudest figures on the anti-gun side of the argument is CNN’s Piers Morgan, who strongly favors stricter gun control and a more progressive interpretation of the Second Amendment.

On December 18th – four days after the school massacre in Connecticut – Larry Pratt, executive director of Gun Owners of America, was a guest on Morgan’s television show, Piers Morgan Tonight. During the interview, Morgan repeatedly talked over his guest and hurled insults ranging from “unbelievably stupid” to “you shame your country,” finally claiming that Pratt’s goal is to put guns in the hands of more “mentally unstable” people.

Considering that Piers Morgan Tonight has been plagued with terrible ratings and low viewing numbers – even for CNN – Morgan is usually ignored by most intelligent people, and subsequently his rants go largely unnoticed. With tensions high throughout the country after the Sandy Hook shooting, though, the video of Morgan’s attack on Pratt went viral on social media. In response to Morgan’s rabid behavior toward Pratt – and as a general commentary on the host’s vocal anti-gun rhetoric – pro-Second Amendment talk radio personality Alex Jones created a petition on the White House website to have Morgan, a British citizen, immediately deported for his, “hostile attack against the U.S. Constitution by targeting the Second Amendment.”

Taking to Twitter in response to the petition, Morgan attempted to invoke his First Amendment rights, apparently forgetting he’s a foreign national, not an American citizen to whom the United States Constitution applies.

Jones’ petition rapidly garnered tens of thousands of signatures, easily meeting the White House’s minimum requirement to receive an official response (25,000 signatures in 30 days). After initially making light of the call for his deportation, Morgan eventually invited his nemesis to be a guest on his show.

Alex Jones is known for his animated, ranting commentary, and while he’s considered by some to be a nutty conspiracy theorist, he has gained some mainstream traction. Even the go-to conservative website The Drudge Report regularly links to articles published on Jones’ Infowars. In addition to his web presence, Jones’ syndicated talk-radio show is broadcast on more than 140 stations nationally (according to Jones), meaning his wide-reaching influence cannot not be ignored.

Anyway, fans and critics alike were unsure what to expect when Jones’ appeared on Morgan’s show. He didn’t disappoint, though … that is, if you like watching an extremely uncomfortable tirade being hurled at a smug British know-it-all. Jones seemed to be an almost cartoon-esque madman, shouting that, “1776 will commence again” if the government tries to take away guns from American citizens.

Clearly Morgan must have resolved to be on his best behavior. Instead of employing his typically annoying interview style of talking over and incessantly interrupting his guests, he instead allowed Jones to ramble and rant essentially unchecked. Jones was given more than enough rope to hang himself – and hang himself he did.

The saddest part of the situation is that Jones is absolutely correct in his view on the Second Amendment – and had a real opportunity to educate people on those views. Unfortunately he squandered that opportunity by carrying on about suicide pills, the New World Order, and the American government’s role in the 9/11 attacks. Jones made plenty of good points, but his crazed delivery combined with some of the screwball things he said far outweighed the positives of his appearance.

Some of the crazier highlights from the interview:

Some of the good points Jones made during the interview:

Of course social media exploded immediately following the interview. And while most of what’s been reported is negative towards Jones, there are also some supporters standing up for him.

In the wake of the “debate,” Morgan turned to Politico to share his thoughts on the now viral program – saying that Jones was “the best advertisement for gun control you could wish for.” Morgan also commented on the influence Jones potentially has on the followers of his radio show and websites, saying that “through vitriol and rhetoric he is able to spur heavy gun sales and ammunition sales. He works off of fear.”

That last statement is interesting because it would seem that fear is also Morgan’s greatest tool in his tireless mission to end legal gun ownership in this country.

It is a shame that Jones made himself seem like such a kook, because he had a chance to share the truth about the link between gun control and increased violent crime. He also squandered an opportunity to use a mainstream media program to explain the libertarian viewpoint of the importance of the Second Amendment and what it means for the freedom of all citizens of this country. In mainstream circles, Jones will long be thought of as the hysterical libertarian who went crazy on Piers Morgan Tonight. Such a wasted opportunity and such a setback for the liberty movement.

Megan Jones is a wife, mother, small business owner and libertarian. She lives with her family in coastal Florida.