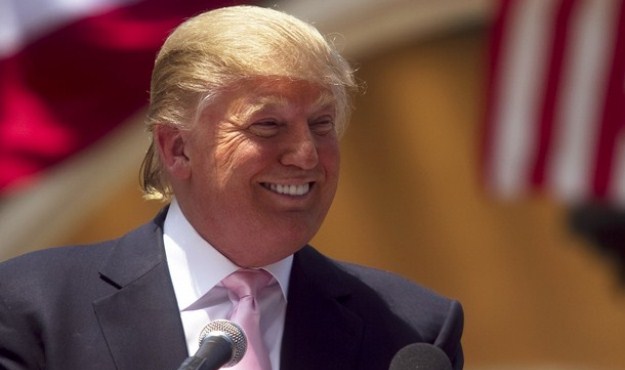 MOGUL’S “OCTOBER SURPRISE” IS A DUD

Just when the presidential campaign of “Republican” Mitt Romney appeared to be pulling ahead of U.S. President Barack Obama, along comes television caricature Donald Trump with his “October Surprise.”

Trump, who briefly flirted with his own presidential bid, created a major buzz when he announced that he was releasing information that would change the landscape of the 2012 election.

The only problem?  Trump’s big “reveal” wound up being a “Birther Bounty” that quickly turned the 66-year-old real estate mogul into a national laughing stock.

Via YouTube, Trump announced that he would give $5 million to the charity of Obama’s choosing if the president released his “college records and applications, and passport application and records.”

Trump also lambasted Obama as “the least transparent president in the history of this country.”

What is Trump trying to prove?

No clue … although we suspect it might be connected to this column published a few months ago by Town Hall columnist Greg Hengler.

“Here’s my gut belief: Obama got a leg up by being admitted to both Occidental and Columbia as a foreign exchange student,” Hengler writes.  “He was raised as a young boy in Indonesia.  But did his mother ever change him back to a U.S. citizen?  When he returned to live with his grandparents in Hawaii or as he neared college-age preparing to apply to schools, did he ever change his citizenship back?  I’m betting not.”

As we’ve said on numerous occasions, we think the whole buzz over birtherism is ridiculous.  And even if it were proven conclusively that Obama was a native Kenyan (even a Muslim one) … we wouldn’t care.

It’s his fiscal liberalism (and economic socialism) that we reject …

Trump endorsed Romney back in March, saying “Mitt is tough, he’s smart, he’s sharp and he’s not going to allow bad things to continue to happen to this country we all love.”

So … how does this stunt help Romney’s cause?