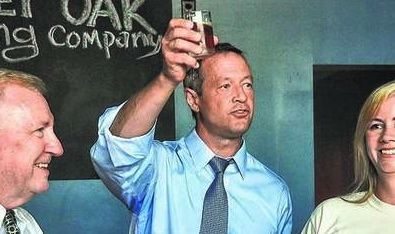 Our friend Jeff Quinton – who runs a great Maryland-based blog entitled The Quinton Report – has an interesting post up about the national scandal surrounding the Old Line State’s Attorney General, Doug Gansler.

For those of you who slept through last week, Gansler’s gubernatorial candidacy suffered a major setback when he bumbled, stumbled and fumbled his way through a press conference attempting to explain his appearance at a teenage boozefest in nearby Delaware back in June.

Why was Gansler on the defensive? Because like so many politicians of both parties who go in search of problems where none exist (and cheap publicity), he staked out ground as an aggressive opponent of underage drinking.

Anyway, Gansler’s implosion in response to the scandal (which you can read more about here) sucked all the oxygen out of the real story – the Democratic political machine that has unsheathed the long knives and aimed for his jugular.

We’re referring of course to allies of Maryland Gov. Martin O’Malley, who is aggressively pushing the gubernatorial candidacy of his No. 2 – Maryland Lt. Gov. Anthony G. Brown.

“I’ve heard many people talk about it as the worst sliming of a Democrat by another Democrat in Maryland for as long as they can remember,” Quinton writes.

According to Quinton, these operatives neglected to mention that O’Malley has his own drinking problems – which apparently run in the family.

In 2010, for example, O’Malley’s daughter was found passed out on the streets of Baltimore (with alcohol poisoning) after attending a high school graduation party. O’Malley’s family did its best to bury the fiasco, saying the girl had “become ill.”

The Baltimore cops were in on the cover-up, too.

“The governor’s daughter is passed out over here,” one of the responding officers told a dispatcher, quickly adding “I can’t put that on the air.”

That conversation was later uncovered by a Freedom of Information Act request.

Don’t get us wrong … Gansler is a big time hypocrite who totally muffed his scandal. But so are the leaders of the political machine attacking him.