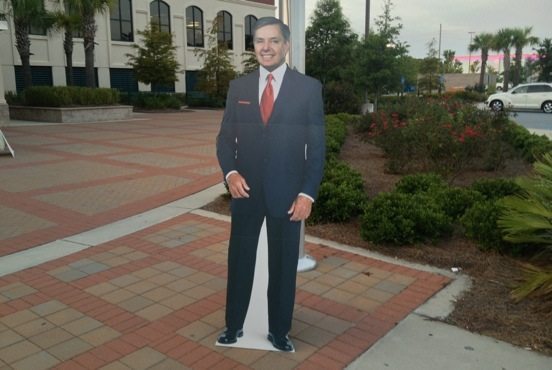 U.S. Sen. Lindsey Graham (RINO-S.C.) opted not to meet with South Carolina voters during the August recess of the United States Congress – so a group of local activists brought a cardboard cutout of the fiscal liberal to a town hall meeting in North Charleston, S.C. this week.

Who did show up to meet with Graham’s constituents?

Lowcountry businesswoman Nancy Mace and S.C. Sen. Lee Bright – both of whom are challenging Graham in next June’s Republican primary. A third challenger, former congressional candidate Richard Cash, was invited but did not attend the gathering – which was organized by local Tea Party leaders with assistance from Freedomworks, a national conservative advocacy organization.

Graham was also extended an invitation to participate … but declined.

One of the more effective anti-Graham narratives emerging in this race is that the warmongering, privacy-assailing, tax-hiking lawmaker has become a “creature of Washington” who is out of touch with the people he represents.

This sort of thing will only serve to reinforce that perception …