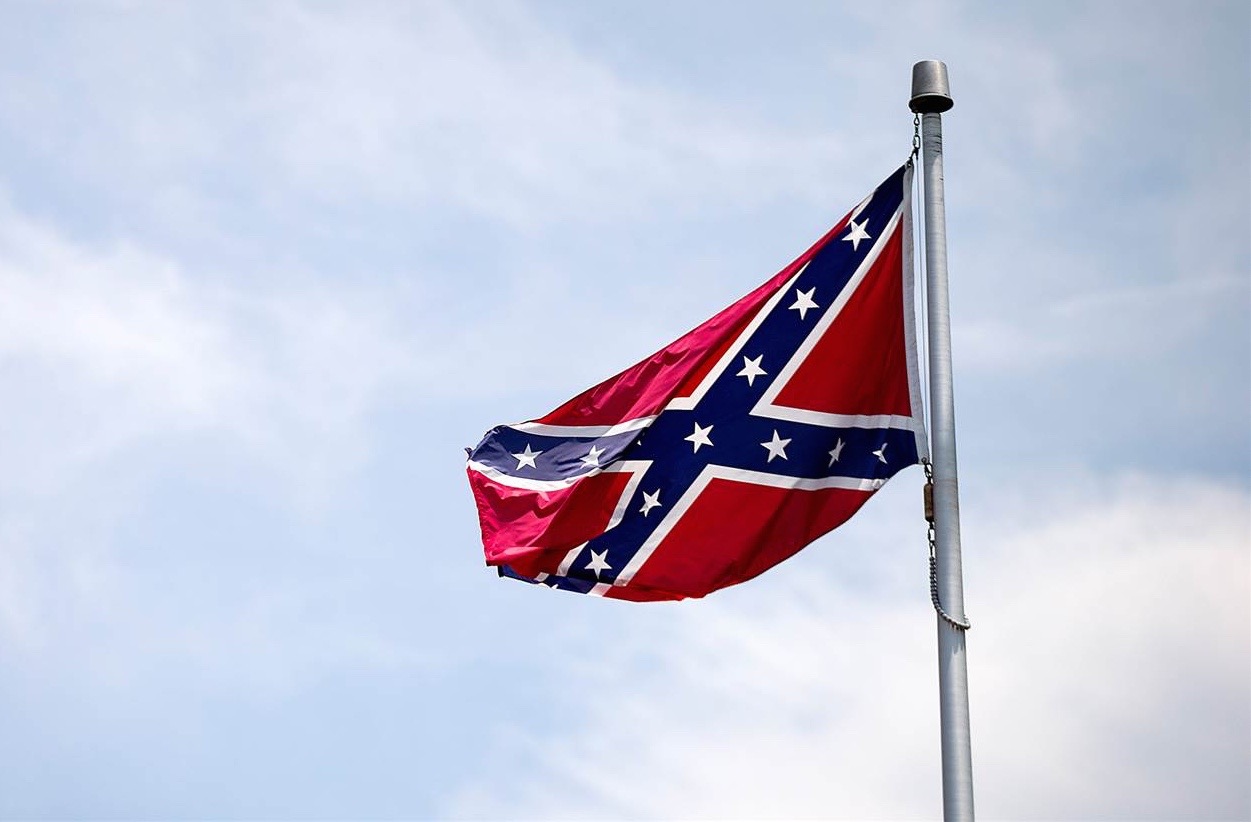 Last month we published a story in which our sources alleged the S.C. State Ports Authority (SCSPA) was paying tens of thousands of dollars each year to the neo-Confederate political consulting empire of “Republican” advisor Richard Quinn.

Quinn, of course, is the father of S.C. Rep. Rick Quinn – an influential politician who has supported hundreds of millions of dollars worth of questionable port expenses (and voted on behalf of budgets containing these expenditures).

Last week, this website filed a Freedom of Information Act (FOIA) request in an effort to determine just how much money has flowed from the agency into this neo-Confederate empire.

Well guess what … it looks like the “tens of thousands of dollars a year” estimate provided by our sources was a dramatic understatement.  Based on the records we received in response to our FOIA, it appears as though Quinn’s firm – First Impressions, Inc. – has received a whopping $2.1 million from the SCSPA over the last six years. 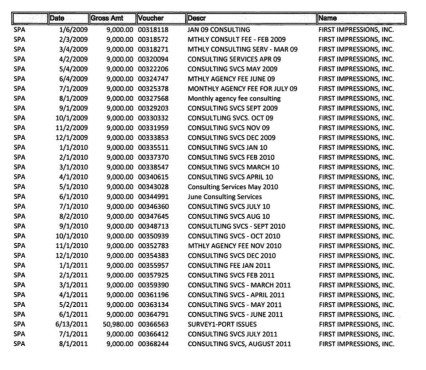 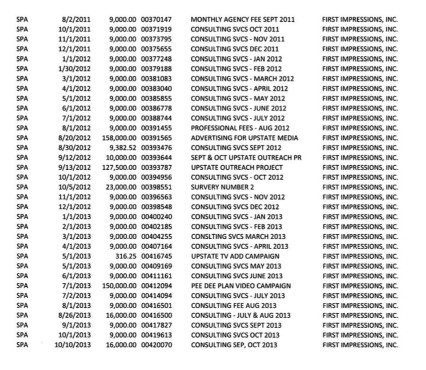 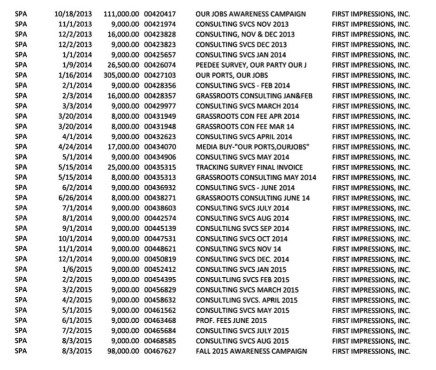 Not only that, a joint venture created by Quinn and another “Republican” political consultant in Columbia, S.C. has hauled in an additional $325,000 from the agency – most of it during the fall of last year.

Our guess is this information will figure prominently in the agency’s upcoming legislative audit – as well as its annual oversight meeting with state lawmakers.

The SCSPA has been touting big gains in its traffic this year, although as this website has pointed out those numbers aren’t as impressive as they sound.  Additionally, the agency has been blasted for dragging its feet on a long-overdue public-private project in Jasper County, overstating the benefits of a government-run dredging project in Charleston and effectively bribing the most powerful politician in the state.

Not a good year …

Neo-Con…What’s worse a Neo-Confederate or a Neoconservative?

One has most of their teeth, the other doesn’t?

You figure out which is which.

Which column would one put dental implants in?

The ones with those are the members of the media in Southern states who are subsidized by both the Neo-Confederates and the Neoconservatives.

Does any else notice that Fitsnews is hiding the identity of the other consultant and the name of the joint venture? The first four have the “Name” column. The last is enlarged and clipped off. Why not name “another “Republican” political consultant?”

I believe that is called a “tease.” Another story to follow, no doubt.
But it is good work.

Folks persists in venting his spleen on behalf of carpetbagger Davis and the Jasper scam as well as thinking that beating up the SCSPA will bring to reality his wet dream of Templeton.

So what if Quinn is “Neo-Confederate”. How does that affect the price of eggs?

Makes the price of eggs go sky-high. Everybody knows that.

Why did the Dixie chicken cross the road?

To succeed from the Union, of course. With a rebel flag under one wing, and a bottle of Reble Yell under the other.

Then the n Neo-Confederate virtual money is not worth squat, so the dollar value of Dixie chicken eggs goes through the roof.

Pretty much makes ya want to be like him, I’d say.

Him who? Folks or Quinn?

Dare to wonder how this article here….

…ties into the same dealings as this……and the payouts to the campaign groomers for the three Mayor elections in Charleston, North Charleston ….and Summerville…?

(what’s the matter Wil….we know your not waiting for Brian Hicks to belch.)

You liberals are really running out of ammunition, aren’t you? Can’t cover up the mess you’ve made forever. The Civil War was over 150 years ago.

Do you think if you keep fighting it, you’ll be on the right side of history this time.

Remember: All SLAVE OWNERS were Democrats. The war started because the DEMOCRAT lost versus Lincoln, the Republican…

And you started the Klan…The Democrat Party fought desegregation.

Now the Democrat Party is still a Race hating bunch of Backward ignorants…you just hate whites now, because it is a way to feed your Greed, and maintain your political power.

Sir, we have been trying to reach you. Please contact us at your earliest convenience to avoid any need for further action. This is regarding a law suit in which you have been identified as possessing important information. Your testimony is required.

Shit, I’m in the wrong business.

Although my soul is probably worth more than $2.5 million….maybe.

I’d have to pile up the money, sit in front of it a while, then decide. It’d be like “Indecent Proposal” except without the good looking people.

Ummmm…Kemosabe…so if you’ve earned some money and value the flag of patriots yours is a “Neo Confederate Empire??? “
Why yes, Tonto—that’s what serial-liar Will Folks believes don’tcha know—guess that Vista beer and coke get you higher
Well now, Kemosabe…speaking of higher…Tonto sees ole Will’s cheap shot a hail Mary that’s bouncing bad off of the rim
Quite true, Tonto—and in 2016 don’tcha know—that long-running Tea Train will hang him, Joe Wilson and Katrina on a limb !!!

Uncle Ben had lotsa friends–fellow Dims doing marijuana and crack
He TOO got Tea Trained in 2016 and good news–he ain’t coming back !!!

Could you guys shut the fuck up and lay low of a year or so?
We’re trying to get elected.

RNC said…vote like me–I’m a gutless Joe Wilson RINO shill who’ll do anything to get elected
Of course the valor of patriots means nothing to me and my immorality has been rejected !!!

But GEEZ, I thought NIMRATA said all the problems in South Carolina were due to the UNIONS?
Her and Katherine( THE SOT) need to run those longshoremen out of the state. Then everything will just PEACHY KEEN!!!!!!!!!!!!!!
YOU BETCHA!

So what else would our criminal Legislature spend the money on!?! fuckin roads, or something like that!?!. Hey, GOPers like whores too! Rick likes Expensive black ones!