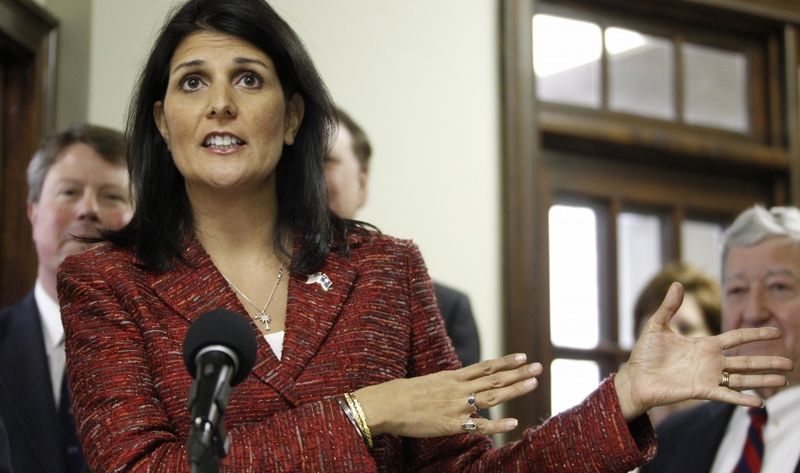 According to data from the governor’s own Department of Health and Human Services (SCDHHS), enrollment is set to soar by 16 percent in the coming fiscal year – triple the projected rate of growth in the current fiscal year. That astronomical figure – which will cost South Carolina taxpayers half a billion dollars – is more than three times higher than the average growth rate in states that didn’t accept Obamacare’s Medicaid expansion.

In fact it’s higher than the 12 percent average increase in states that did accept Obamacare’s Medicaid subsidies.

Even more amazing? The same week we broke this story Haley had the audacity to tell The Wall Street Journal that South Carolina “will not expand Medicaid. Ever.”

Hmmmm-kay … so there’s more health care hypocrisy from Haley. Nothing new there.

This week The Washington Post has published Medicaid expansion data for the current year  – specifically covering the six months from October to March. According to the data – compiled by Avalere Health – South Carolina added 53,600 new beneficiaries to its taxpayer-subsidized rolls over that time period. That’s the fourth-highest total out of the seventeen non-Obamacare states studied. Not only that, South Carolina’s growth rate of 5.4 percent for the period is nearly double the non-Obamacare average increase of 2.8 percent.

Ready for the kicker? Unlike Obamacare growth – which the federal government is subsidizing at 100 percent through 2016 (and at 90 percent thereafter) – South Carolina taxpayers will have to shell out a much higher percentage of expansion costs under “Haleycare.”

“If you factor current federal matching rates we will be paying at least a twenty percent premium on our expansion,” one S.C. Senator familiar with the process told FITS. “Not only are we growing the program faster than Obamacare states – we are paying more in state money to do so.”

Obviously that’s not good a reason to accept Obamacare’s Medicaid expansion … but it would have been a very good reason for Haley not to engage in her own reckless expansion.

Obamacare Shocker: Contractors Paid To Do Nothing

If this is a “massive” expansion of Medicaid we might as well have taken it.

She isn’t expanding medicaid, she’s contacting those who were eligible before the ACA and letting them claim benefits that they are entitled too. Mr folks is pandering… much like many on the GOP. He is sadly misguided.

Dakota.You may be ‘brain damaged’ like Hillary Clinton however you are correct about your Medicaid argument.

…and she has the good looks and I-beat-the-good-ole-boys story line that the national media love. She is indeed looking beyond the next eight months in career planning. Screw the people, right?

You’re asking me to believe you, Pootlian, Sheheen and Obama??…I’m sorry but my hard-drive just went limp…

Haley gets NOTHING out of an out of control federal-gov’t devised social program…so I call B*!!-$#*t on your attempt to tie it around her neck…

Is the country F*#k#d up..and that goes double for federal spending?…. “YES”…but when I look at track record you are a F*#king Fool (as usual) to try to lay it on Haley, and not your lord-god Obama…

Your premise just makes no sense…

“Your premise just makes no sense…”

Welcome to our world, Tango.

Shouldn’t that be Copy Cat?…because any point you make, is simply a regurgitation of my premise…that you are too stupid to think of yourself…???

You could not think of something on your own, if your D*#k was on fire, and the only way FITS would suck out the flames…if you could posit an original thought..

I just love how you put yourself in an untenable position by your own words.

C’mon, don’t Bull-$#!* me. That’s not it..You’re just too F*#king stupid to present anything worth reading, unless you co-opt my words…

E-mail the DNC, or FITS… They’ll put something in your mouth…They feed their idiots, routinely…

You mad, Boo? It’s okay to admit you were outsmarted by a smartass.

South Carolinians smart enough to ignore our governor’s habitual
detractors realize that the driving impetus for SC’s medicaid
expansion has not been Haley, but obviously the effort of Obamacare’s insurance
“navigators”.

Obamacare mandated these navigators, of course.
Just another reason health insurance rates will be skyrocketing next year, and next year…!

Yeh thats ALWAYS lost in the Obama Obsession that grips Fits and his merry crew.To hear them tell it,why things were going great on the healthCare front till Obama came along.

Hate does wonders for ones memory.Why certain things just never were and never happened.

I see Gov Haley’s dress wearing husband is at it again. Trying to defend the indefensible. Still wearing the latex outfit?

She knew we should have taken the money we already paid taxes on. Now her showboating for the Teabaggers is going to cost us all double if not triple. IDIOT!!

Haley is smart-she saw North Carolina bankrupted several years ago by illegal immigrants on the Medicaid rolls. She is not allowing that to happen to South Carolina.
Great move Haley.Kasich only did it in Ohio cause he made a mistake with teachers/police/firemen and their unions.The people that helped elect him. Kasich is up 20 points in Ohio and Scott has pulled ahead in Florida in his race against Tom Ervin.
Keep up the good work.

The Hell with HealthCare!

You drop dead first then we will push your ass over the Elmwood street bridge so you can fall on the big rock and the birds..crow can eat r crazy a****.

Here is the truth about the expansion – SC has not changed it’s eligibility requirements. The Medicaid rolls are expanding because SC DHHS is actively seeking those who are already eligible (mostly poor children) and getting them in the system.

The reasoning behind that is that having them in the system is cheaper than having them just going to ERs and/or being uninsured which drives up the cost of healthcare when they get sick from preventable issues that could have been avoided.

You can agree or disagree but it isn’t like they are expanding eligibility. No Haley fan here, but the goal behind it is to get those who are such a cost-driver in healthcare into some form of care (thus avoiding highest cost care). Take it FWIW.

At the end of the day, SC has a mind-blowing amount of poor/sick people in it.

I said that when Fits first started covering it. He doesn’t care.

Part of it is the ‘woodwork’ effect, people hearing so much about Medicaid that they finally decide to apply and find they are eligible.

When Haley looks in a mirror does she see her reflection?

What’s a few pennies here or there when you have the opportunity to stick it to America’s first black president?
Never underestimate South Carolina’s propensity for cutting off its nose to spite its face.

Clinton was the FIRST black president in the WHITE House.Obama had a white mother from Kansas so he is white.

I thought Obama was from Kenya.

Fuck Obama! He hates America and just took a big SHIT on the veterans in this country via the VA.
SOB cares more about 200 children in Nigeria that his muslim brotherhood buddies are holding hostage than our own veterans that have served this country.

Yeh Bo let all your hate out.Tell us the damn truth about that damn Kenyan!

Speaking of caring for veterans, check out this little tidbit from your man Dubya:

What did you have to say when Bush took the first shit on the VA?

Well we have a real, live Birther on bored (bored with birtherism).

It’s not just SC this time, it’s every RED state that rejected the Medicaid expansion like John Roberts told them they could. Too bad he wasn’t smart enough to tell them whether or not they should.

There are still some questions that the 13 investigations we’ve had to date have most definitely not answered:

1) What, exactly, is the connection between Benghazi and the 6.5 magnitude earthquake that occurred on the island of Yap in Micronesia yesterday? What is the Obama administration hiding?

2) Why does Benghazi have the same first name as Ben Stein, Ben & Jerry, Ben Gazzara and Uncle Ben? Coincidence? (I for one don’t believe in coincidence).

4) Where the fuck IS Benghazi, anyway? Is Libya in Liberia? Is it where Libertarians come from? Is everyone there a Libran? Are Librarians using this as a pretext to unionize?

After all this time, the American people have a right to some answers.

Librarians are the most diabolical, ruthless bunch of bureaucrats I’ve ever seen. They’re like a biker gang, but instead of shotguns and crystal meth, they use political savvy and shushing.

What difference does it make, didn’t you hear?…Hillary has brain damage…

Translation: the democrat party has figured out the Black vote now owns that party…

Either throw a Black Candidate up, to motivate the Racist voters (your whole party) or you LOSE….Live as a Racist…Die as a Racist….

Don’t worry Mr. Grand Tango, there will be at least six people at your funeral. Of course they will have to double up as Pall Bearers. But you seem to be a practical person, so fuck em all except 6 and hope they’re Pall Bearers.

Wishing death upon another human. How bitter, angry and nasty a liberal you are…

As for me: I pray you have beautiful and healthy children. I hope your wife (or partner) is happy, faithful and adoring of you…and you are prosperous, w/ a thanks for the bounty you receive…

It is sad that you let your politics of greed and power pollute your soul to the point you want another man dead, w/ no friends at his funeral…it says a great deal about the kind of American, and political vessel, you are…It’s how you can be motivated by REVENGE to vote…God have mercy, and help enlighten you…

I was just responding to your last comment. where you ranted about Blacks, Liberals and you covered,and just about every group you find offensive (which is pretty much your political positions. I don’t wish you were dead. I just wish you could be a little civil. But to go to your comment (don’t hold your breath). Yes I will marry you. It would be an honor. Kissy, Kissy.to you, my intended.

I think the democrat party is forced to offer up a Black nominee for president. The formula to motivate democrat voters, nationally is race-based. You can deny that, but we’ll see…

It’s why the democrat dirty-tricksters took out Herman Cain. They could not take a chance of him skimming you race-base voters. If he got 2-3% of the black vote, you lose the election…

That said: I actually find the lack of political intelligence, or lack of honesty, as offensive as I find liberals to be…

You cannot, or will not, consider any idea or opinion that does not fit in w/ the fantasy scenarios the media feeds you, based on liberal myths, fables and lies…

Does this mean the Wedding is off? You’re right about me, “I’m shallow and have no goals”. Life is so much more fun when I don’t care. All politicians are like prostitutes, The only way you can get to get Politicians to do anything a lot of money will be the great decider..

Born an idiot, die an idiot.

Maybe you have Tourette’s

Until Haley is out of office we are all in jeopardy. We have had a personal information stolen, we have had our kids dying, we are the lowest income earning levels in the US. But hey her staff and her family are making out well.

Speaking of massive expansion…just how much weight has she gained anyway? Will, SO glad you didn’t end

up with that woman. Dumping her was probably the best thing you ever did.

It’s the entitlement shit again! Hell everyone should give up sit home and scratch their ass!

You put way too many facts and figures out there for an accountant like her to understand.