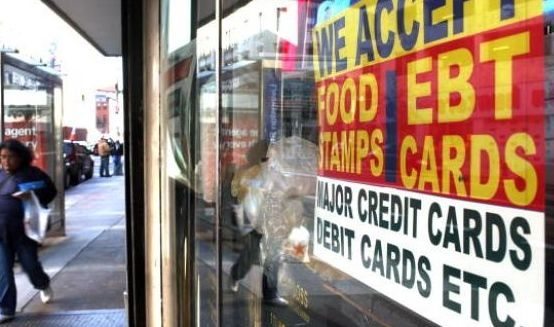 WELCOME TO THE “RECOVERY …”

Because America is in the midst of an economy “recovery,” its government can start scaling back on food stamps … the use of which has spiked to record levels in recent years.

Wrong … as is the case with extended unemployment benefits, a “recovered” America just can’t seem to quit this dependency dole.

America’s “Food Stamp Nation” rolled right along in the latest “Farm Bill” passed by the U.S. Congress, receiving a modest “cut” of $800 million (out of $80 billion).

For those of you keeping score at home, the food stamp program cost taxpayers $33 billion a year in 2007.

Which means this is still $47 billion more …

House “Republicans” had sought to pare the program by $4 billion, but U.S. President Barack Obama threatened to veto the legislation … and so “Republicans” did what they always do: They caved.

With the backing of U.S. Speaker John Boehner, the “GOP-controlled” House of Representatives voted 251-166 in support of this “compromise” legislation.

“The final price tag on this bill over the next ten years is $956 billion, and given what happened with the last farm bill, I think that number’s likely to go higher,” Sanford said in a statement accompanying his vote. “This version already costs over 60 percent more than the 2008 bill, and programs in that version ended up costing more than what Congress originally authorized. I think it’s likely we’ll see something similar happen here.”

And the beat goes on …