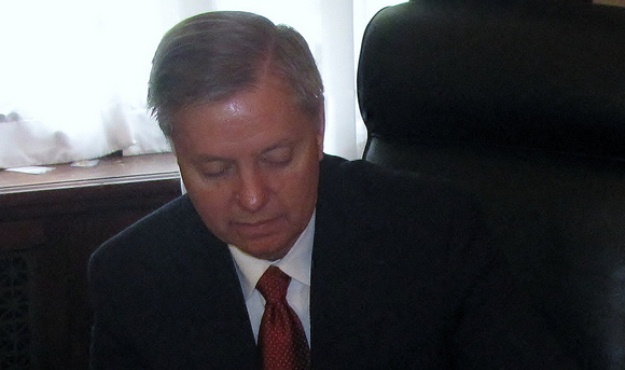 A joke suggesting that U.S. Sen. Lindsey Graham (RINO-S.C.) is effeminate was edited out of an MSNBC rebroadcast this week – which we suppose is the liberal network’s way of watching out for one of its own.

The exchange occurred on the “Morning Joe” program and featured the show’s hosts, Joe Scarborough and John Heilemann.

Basically, Heilemann suggested that Graham was a woman – at which point he and Scarborough started laughing hysterically.  Here’s the clip (and the network’s re-edit) if you care …

The end result of this exchange?  Another round of national news stories in which Graham’s sexuality is called into question.

Frankly we don’t care if Graham is gay.  He can smoke pole all day, every day as far as we’re concerned … it doesn’t change the fact that he’s a fiscal liberal and neocon warmonger.  His personal life … whatever … it’s his fellating of big government and our nation’s military-industrial complex that keeps us from supporting him.

Of course if Graham is ever exposed (or comes out) as a homosexual, he’ll have a long list of anti-gay votes to explain …

Another Old Ship? Not With Our Tax Dollars!