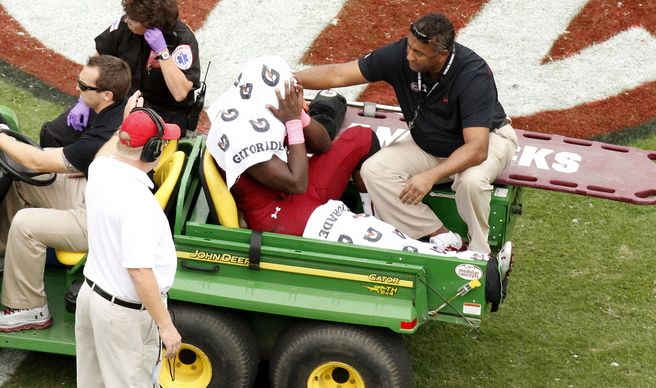 University of South Carolina running back Marcus Lattimore suffered a gruesome injury to his right knee during the first half of the Gamecocks 38-35 win over Tennessee at Williams Brice Stadium this weekend.

Lattimore’s injury – replays of which immediately invoked comparisons to the career-ending leg injury sustained by former Washington Redskins’ quarterback Joe Theismann – was sustained midway through the second quarter on a running play in which Lattimore had cut to the left side of the field seeking daylight.  While being tackled from behind by Tennessee linebacker Herman Lathers, the Gamecock superstar was hit low by Volunteers’ defensive back Eric Gordon – causing his right knee to contort.

Initial unconfirmed reports from sources close to the USC football program indicate that Lattimore suffered a dislocated right knee with possible arterial damage.  Obviously any injury to a player’s circulatory system is cause for serious alarm.

Here’s a video of the play, although we would warn our readers that it is extremely graphic.

Lattimore’s Gamecock teammates – and members of the Tennessee football team – surrounded the preseason All-American as he was carted off of the field clutching a towel to his face.

“Act like every play is your last play!” Lattimore is said to have exhorted his teammates as he left the field.

Moments later, he was taken to a local hospital for evaluation.  Gamecock fans at Williams Brice Stadium didn’t see the replay of Lattimore’s injury – and were not initially aware just how serious it was.  However anyone watching ESPN’s national broadcast of the game – including former Gamecock linebacker Anton Gunn – knew immediately upon seeing the replays that it was devastating.

“That was the worst injury I have ever seen,” Gunn tweeted.  “I have tears in my eyes for him.”

Lattimore – a 6-foot-1, 218-pound junior from Duncan, S.C. – is the school’s career scoring leader.  In fact he added to his record-breaking total earlier in the game when he raced through the Tennessee defense on a 28-yard scoring run.

Last season, Lattimore suffered a season-ending knee injury during a mid-October game against Mississippi State – causing him to miss the final six games of the season.

In 28 career games at USC, Lattimore has rushed for 2,682 yards and amassed another 767 yards through the air.  He’s also scored a school-record 41 touchdowns.

While a catastrophic injury like this is terrible no matter who suffers it, Lattimore’s injury seems especially unfair given what a class act he’s been ever since arriving on campus three years ago.  Throughout his record-breaking career at USC Lattimore has been a soft-spoken leader on the field and a humble, straight-laced student off of it.