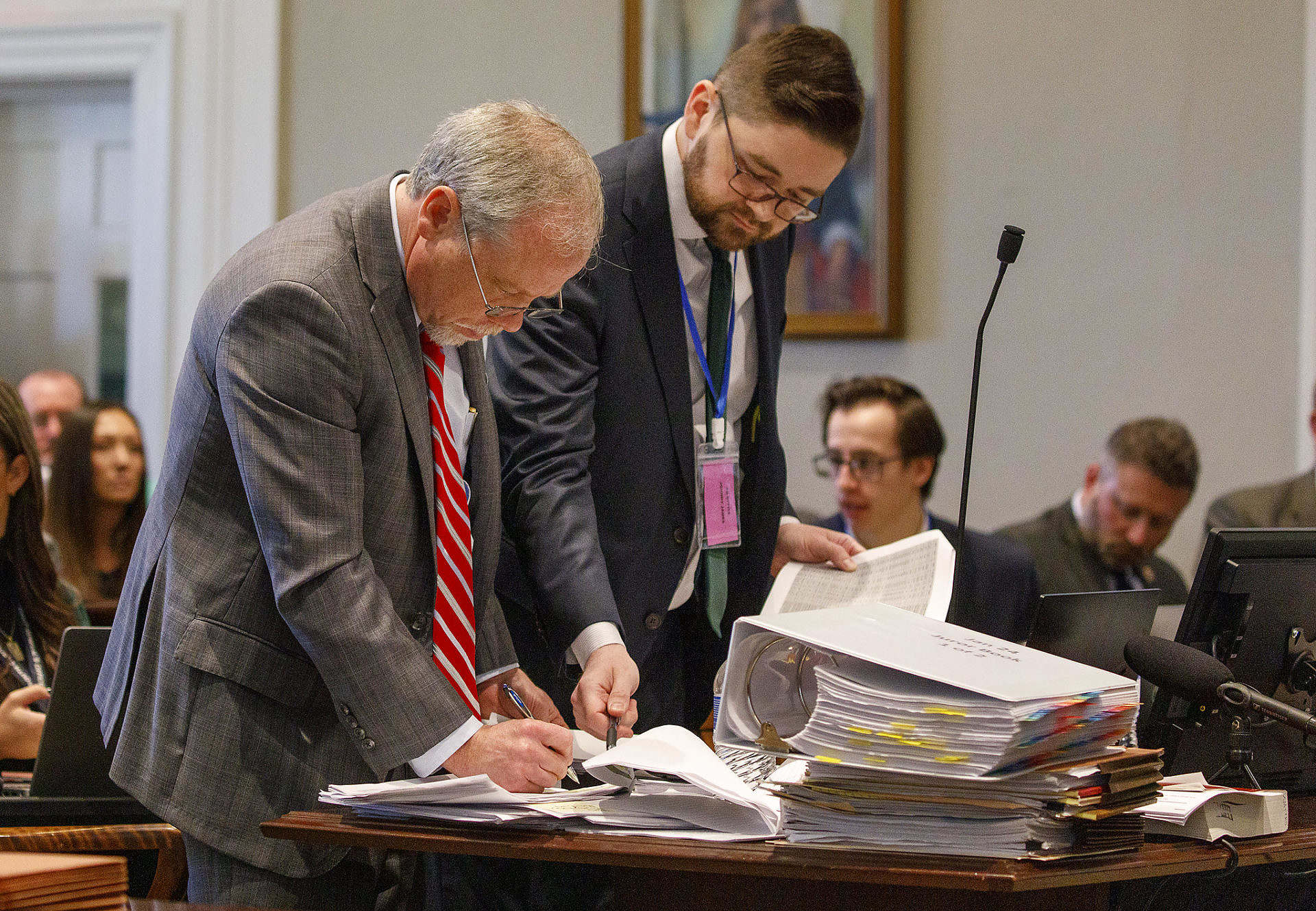 Prosecutors in the office of South Carolina attorney general Alan Wilson scored a major win on the second day of the double homicide trial of Alex Murdaugh – the disbarred attorney at the epicenter of the ‘Murdaugh Murders‘ crime and corruption saga.

Greer has traced ammunition used in the murder of one of Murdaugh’s victims to ammunition found at other sites on the family hunting property where they were killed – and tied all of this ammunition to a missing gun owned by Alex Murdaugh.

Greer’s testimony – and the evidence he will testify to at trial – was the focus of an eleventh-hour defense motion filed on Monday by Murdaugh’s attorneys Dick Harpootlian and Jim Griffin.

According to that motion (.pdf), Greer’s testimony should have been excluded – or limited – during the upcoming trial because “his opinion testimony does not aid the trier of fact to understand the evidence.”

S.C. circuit court judge Clifton Newman – who was tapped by the S.C. supreme court to handle this case back in September of 2021 – disagreed, allowing the state to admit what lead prosecutor Creighton Waters referred to as a “very significant piece of evidence.”

Newman ruled that prosecutors had “met the threshold” to include both the evidence and the accompanying testimony – concluding it would “assist the jury” in its deliberations. He further found Greer was “well-qualified” to speak to the subject matter at issue. Finally, Newman rejected the defense’s contention that ballistics evidence was not an established science.

“The underlying science is solid,” Newman said at the conclusion of a two-and-a-half hour hearing on Tuesday afternoon.

“Are you able to state with a reasonable degree of certainty that only one weapon in the world could have made these marks?” Griffin asked Greer.

Greer repeatedly referred to “matching mechanism marks” on the ammunition, which led him to conclude the projectiles “came from the same firearm.”

Griffin pushed back, saying Greer could be confusing the fact that ammunition from guns “produced in the same production lots have identical markings.”

Greer responded that his analysis – which was confirmed by two independent SLED analyses – was based on “pattern matching” that enabled him to “distinguish and correctly identify” the weapon from others manufactured in the same lot.

The ballistic evidence and testimony lies at the very heart of the case against Murdaugh – who is accused of savagely murdering his family members nineteen months ago.

For those of you unhip to rifle rounds,.300 blackout ammunition is preferable in some hunting and home defense situations to the AR-15’s typical chambering (5.56) because it offers increased power without the intense recoil and over-penetration associated with heavier rounds.

The rifle used to kill Maggie Murdaugh has not yet been found. Nor has the shotgun used to kill Paul Murdaugh.

As SLED agents continue searching diligently for these weapons, Greer was able to conclude something significant … that .300 blackout cartridges found at a shooting range and near the residence were “loaded into, extracted and ejected from the same firearm at some previous time.”

In other words, while prosecutors may not have the murder weapons in hand – they can point to the next best thing: That those weapons allegedly belonged to the Murdaugh’s and were used on the Murdaugh’s property on previous occasions.

This would tie in nicely with the prosecution’s theory of the timeline of the murders – and how that timeline wrecked Murdaugh’s so-called “ironclad” alibi. It would also dovetail nicely into one of the key witnesses in the case, who is expected to testify they saw Murdaugh “hiding evidence” in the aftermath of the murders at his parents home in Almeda, S.C.

It could also point to a potential accomplice in the crimes … or an accessory after the fact.

Furthermore, the testimony Greer is expected to provide would severely undermine Murdaugh’s claim that the “real killers” of his wife and son were vigilantes looking to kill Paul as retribution for his involvement in a fatal 2019 boat crash that killed 19-year-old Mallory Beach of Hampton, S.C.

I have practiced lay in small rural county in Kentucky since 1985 . With defendants contacts and network of dirty dead’s done dirt cheap can’t see state picking jury he can’t get hung . Amazed state did not move for venue change ,attorney general comes through very cocky . Issue not as worded in your pole of guilty or innocent ,but do you believe beyond reasonable doubt . Who ever shot son would have blood splatter over face and hair .been involved in shotgun murders . Window to close for call to 911. Prosecutor by narrowing time window has gave these defense attorneys lot work with .they are good .love your work

You have a law degree but don’t know how to spell?

I too have been in some big lawsuits .. notice in the above photo defendants have a huge juror book ‘Jan 24 Juror book’ he is also holding a list of prospective jurors.. you can glean almost everything from social media about people. In my ‘voir dire’, I had a list of 100 prospective jurors and was able in one night to find out amazing info in order to find the most likely to be sympathetic to my cause. With a defense team likes that, the prosecution must be on point. The motion in limine to exclude ballistic opinions and data hopefully will be overruled!

I too have been in some big lawsuits .. notice in the above photo defendants have a huge juror book ‘Jan 24 Juror book’ he is also holding a list of prospective jurors.. you can glean almost everything from social media about people. In my ‘voir dire’, I had a list of 100 prospective jurors and was able in one night to find out amazing info in order to find the most likely to be sympathetic to my cause. With a defense team likes that, the prosecution must be on point.

and so it was…