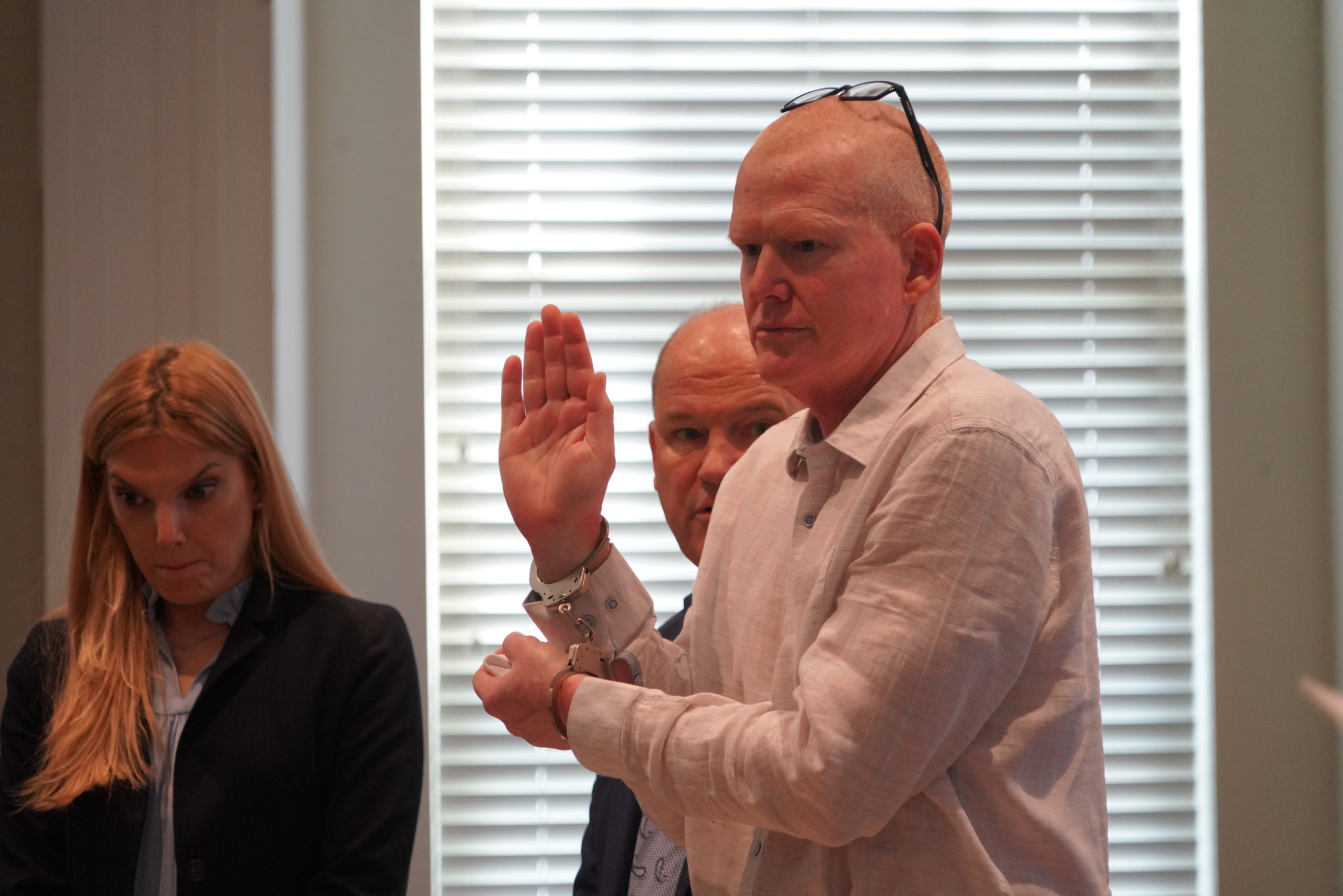 Leaving no stone unturned in their bid to beat back a pair of murder raps against their client, attorneys for disbarred lawyer/ accused killer Alex Murdaugh are carefully considering the optics of how he appears in court – asking a South Carolina judge to allow him to appear sans shackles.

According to a motion submitted on Wednesday (November 30, 2022) in Colleton County, S.C., state senator Dick Harpootlian and veteran Columbia, S.C. trial lawyer Jim Griffin – Murdaugh’s attorneys – want their client’s shackles removed when he appears in court in the presence of television cameras.

Their request applies to Murdaugh’s upcoming double homicide trial as well as any pretrial hearings that may be scheduled between now and then.

“There is no specific, special need to shackle Mr.Murdaugh in the courtroom,” Harpootlian and Griffin wrote in their pleading (.pdf) before S.C. circuit court judge Clifton Newman. “He has not — and is not alleged to have – engaged in any behavior suggesting he is a threat to the courtroom or will somehow escape from it.”

The cited a previous federal court ruling in which the need to shackle defendants was based on “disruptive courtroom behavior, attempts to escape from custody, assaults or attempted assaults while in custody or a pattern of defiant behavior toward corrections officials and judicial authorities.”

Murdaugh, they argued, has displayed none of those traits.


Harpootlian and Griffin also cited a 2018 murder case involving Newman in which a defendant who was accused of killing a police officer as part of a four-state crime spree smuggled a “functioning, homemade handcuff key” into the courtroom “in his mouth.”

“Even with that specific threat of escape, (Newman) declined to have the defendant’s hands shackled, reasoning that the sheriff was aware of the issue and would be able to keep the defendant from escaping without shackling his hands,” the attorneys noted.

“I would not want to have him shackled in the presence of the jury with his shackles being visible due to the effect that it may have on his right to a fair trial,” Newman said during the trial proceedings referenced in Harpootlian and Griffin’s filing.

The logic of giving such deference to defendants in court? Easy: When members of a jury see a defendant in shackles, they default to a presumption of guilt – which creates an unfair bias against the defendant, thus jeopardizing their right to a fair trial.

Certainly, I agree with Harpootlian and Griffin that Murdaugh should be unshackled in the presence of a jury – barring any specific conduct on his part that would justify the need to use such restraints.

But what about pretrial court appearances? According to Harpootlian and Griffin, “it is true murder defendants are typically shackled in pretrial hearings, but that is irrelevant.”

“Most murder defendants do not have TV crews filming every pretrial hearing,” they wrote. “Those who do, like Mr. Murdaugh, have a constitutional right to be unshackled unless there is an articulatable security issue specific to the individual defendant.”

In raising this issue, Harpootlian and Griffin specifically cited how Murdaugh was being “displayed to the jury pool in advance of jury selection.”

Is their argument valid?

Murdaugh’s double homicide case is the highest-profile prosecution tied to the ‘Murdaugh Murders’ crime and corruption saga – a still unfolding Southern Gothic saga that chronicles the fall of the “House of Murdaugh,” a powerful legal dynasty which ran the Palmetto State’s Lowcountry like its own fiefdom for more than a century.

Paul Murdaugh was hit by a pair of shotgun blasts on that fateful evening – one to the head, the other to the arm and chest. Maggie Murdaugh was killed by multiple rounds from a semi-automatic rifle at or around the time her son was killed. At least two of Maggie Murdaugh’s gunshot wounds were inflicted as she was lying wounded on the ground – consistent with initial reports we received of “execution-style” slayings.

Murdaugh, 54, has pleaded not guilty to those charges and is scheduled to stand trial next month after he reportedly rejected a rumored plea agreement prior to the Thanksgiving break.

He is scheduled to appear before Newman this Friday (December 2, 2022) with his attorneys for a status conference.

Should Alex Murdaugh be restrained by shackles when he appears in court?