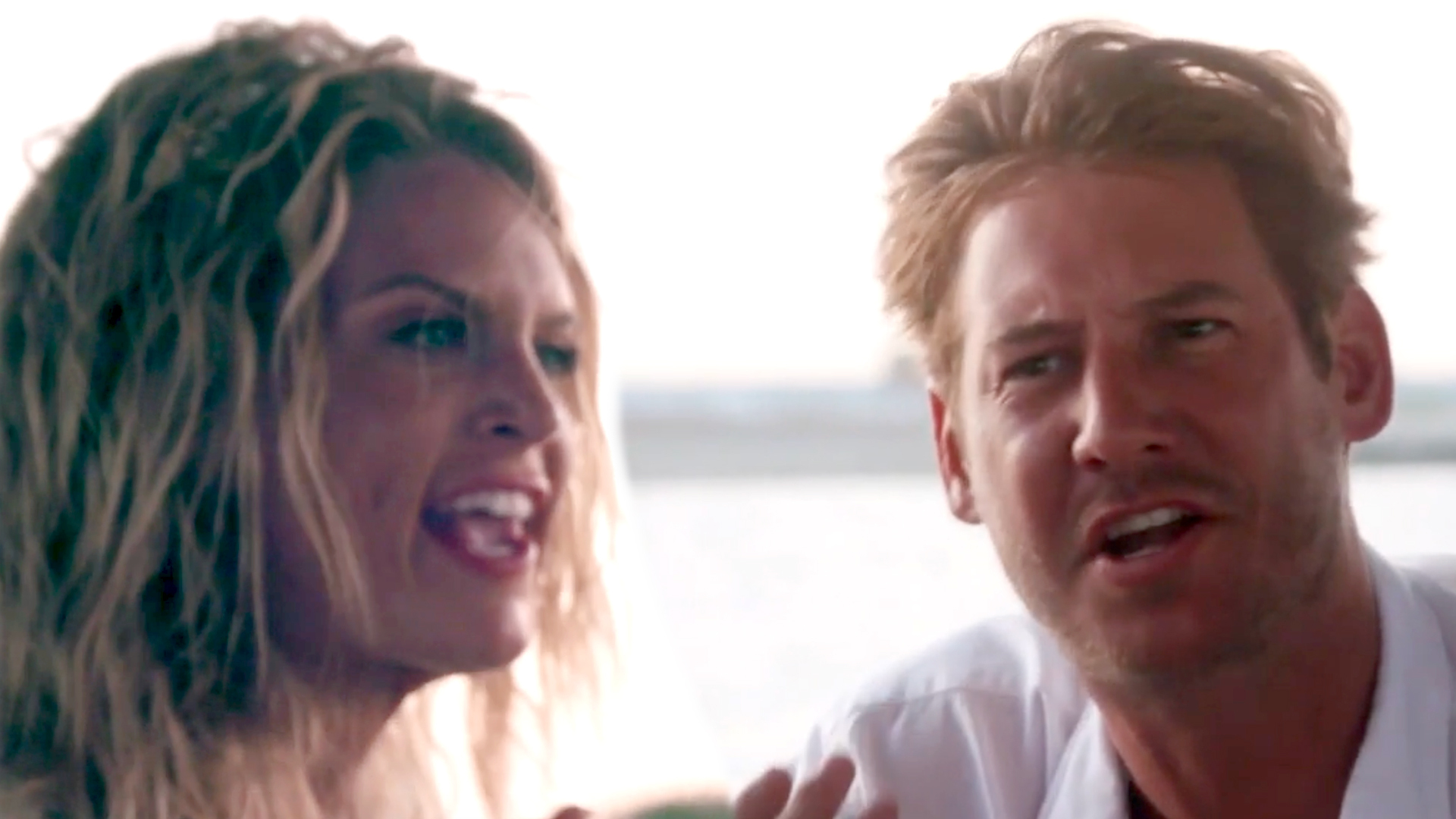 Welcome back from what I’m sure was a relaxing holiday break. I’d love to be able to tell you that the latest episode of Bravo TV’s Southern Charm was lighter and fluffier than those which preceded it, but alas, we appear to be in the middle of watching the death throes of a series that is likely in its final season.

After a two week break, let’s catch up on where we left off – at a Casa Altschul crab feast for “the boys.” While viewers have already watched the breakup scene between Madison LeCroy and Austen Kroll, it seems this dead horse will be beaten for the foreseeable future – with everyone weighing in on the subject of their parting. The final scene of “Lowcountry Broil” had Craig Conover of all people lecturing Madison on how to proceed with all things Austen. But this week’s episode will highlight yet another tense South Carolina dinner party.

Maybe this group should take note that dinner parties may not be the way to go?

We open with a quick check in on all of the charmers, and the first scene is the Pringle family on a fishing outing. John Pringle’s sister, Jenny, joins them and the boys get a casting lesson. John laments about wanting to be a cool dad. Quick switch to Madison who is sending out invites to Austen’s birthday party – minus Austen. It’s a beach party on a private island for dinner and drinks.

Next, Shep Rose and Kathryn Dennis meet for some lunch on a Friday afternoon. The emoji topic comes up again, and Mr. Rose says it perfectly – that Kathryn is at fault, but she’s not a racist. Oblivious? Yes. Hateful? No. KD takes this lunchtime to tell Shep about her new boyfriend, Chleb Ravenell (pronounced Cay-leb).

In her confessional, she admits that “he’s a nice Ravenell.”


Chleb is the brother of Chelsie Ravenell, who, along with his partner Jacqueline have been on the show at events as “friends of” the cast.

Over at Austen’s house, a phone conversation with Madison reveals that he is no longer welcome at his own birthday party. She explains that Craig believes she should separate from Austen and move on. I think this is called foreshadowing, as everyone is already on edge approaching yet another Southern Charm dinner disaster.

Also getting worked up for the party are the ladies, who meet with Madison Simon at Gwynn’s to choose party attire. Of course, the topic turns to Kathryn and her new boyfriend – who have now been together nearly one year. If this is a fake relationship, she’s playing a pretty long-term con.

Next, the action turns to Capers Island where Madison is getting ready for Austen’s birthday party – possibly minus Austen. But over at Austen’s house, he’s getting ready for a party. I didn’t get the memo, but by the dress of most of the guests, this looks ironically like a white party (more foreshadowing) minus Shep and Veneta, both in blue. The boat pulls away from the dock for the half hour trip to the island. Another side note, nothing good ever happens on an island or a boat on a Bravo show, i.e. scary island on The Real Housewives of New York.

Craig and Kathryn are heading to the party together, and once again, Craig shares his thoughts on other people’s relationships. This time, he’s talking about Danni Baird, saying that she hasn’t been “right” since her breakup with Gentry Todd, the real estate agent embroiled in last year’s drama between Danni and Madison LeCroy.

Back on the boat, this ride to the island is a bit better than the one to and from Daufuskie with Thomas Ravenel and his then back-up plan, Ashley Jacobs – who packed multiple personalities for that trip. As they approach the island, the crew spots Madison the hostess awaiting them in a flowing white dress. Austen and Shep have been chatting, and the sarcasm is flowing like Trop Hop, his beer. Austen is the last guy off the pontoon – much to Madison’s chagrin. Awk-ward, beyond the super spreader vibe.

On the beach some corn hole breaks out, and Madison tells the girls that she had disinvited Austen. Leva Bonaparte asks why Kathryn is being seated near Craig. You know, I appreciate your point of view about many things, but where KD sits at a dinner party thrown by another is none of your business. She comments on Kathryn being coddled, but this isn’t fifth grade, and just because you dislike someone, doesn’t mean the whole party has to gang up. But I guess that being polite for a few hours at a party isn’t a reality television thing.

The old chestnut “if you have nothing nice to say, don’t say anything at all” hasn’t made it to this or any contrived Bravo social circle. Instead of being at the peak of the moral high ground, you just seem bitchy. Maybe I’m just getting old and my bitchiest days are behind me, but this all seems forced.


The Mediterranean spread looks lovely, including the antipasti, but the “mom and dad are fighting” vibe is anything but. Kathryn and Craig arrive, and there is a serious cold shoulder. This is sure not the time and place, but it seems like it’s going down no matter what. The table is not that large, and everyone has to hear the talking behind everyone’s back, but right to their faces. The Austen and Madison vibe is ultra-uncomfortable for everyone who is trapped on the island along with the bickering couple.

But if you thought the only blowup would be the former couple, you are wrong. It seems that there is more animosity than fellowship at this particular gathering under the July South Carolina sun. Danni and Kathryn walk away from the group for a forced chat, and things get heated. Madison Simon joins them, and nobody is saying what they need to say. Danni admits that she wasn’t ready to talk, and this is one more reason not to force confrontations at someone else’s event. It’s rude and a bit tacky.

Everything seems calm for a beat when Craig once again pulls the Dr. Phil act and oversteps. For a guy that needs a village to conduct his own private and professional lives, he sure is comfortable telling everyone else what they should do in any given situation. Grow up or shut up. Or as Leva said, “Craig, don’t be an asshole.”

Madison approaches Kathryn and Danni and explains that it’s time to go. If the boat trip back from Daufuskie was stressful, wait for boat trip 2.0 for more yelling, finger pointing, and accusations. Madison Simon and Kathryn take a moment to rehash Kathryn’s emoji moment until communication breaks down again.

Austen, still angered by his disinvite from his own birthday party is scrapping for a fight, and gets into it with Leva. “You shut the fuck up, no, you shut the fuck up” is not productive, but fueled by alcohol, it gets loud, especially when hostess Madison steps in and tells Austen to STFU. Kathryn stays quiet with that look on her face like she’s smelled something nasty, but it’s her out of body face when things get stressful.

As an aside, the tide really has turned on the show since Daufuskie and that Thomas/Ashley flip out. The women now are holding their own in the raised voices department, but in the end, nothing is accomplished. The preview for the next double episode teases more drama and ongoing talks about racism. I think the key word for this season is “agenda,” which is what production is selling this year.

It’s interesting that in season’s past – in a show about white people in Charleston, South Carolina – race was never mentioned, and now the powers that be are doubling and tripling down, trying to make up for lost time. But … you can’t do that. Something needs to be said for speaking your truth, being responsible for yourself and your behavior, and moving on when and if people disappoint you.