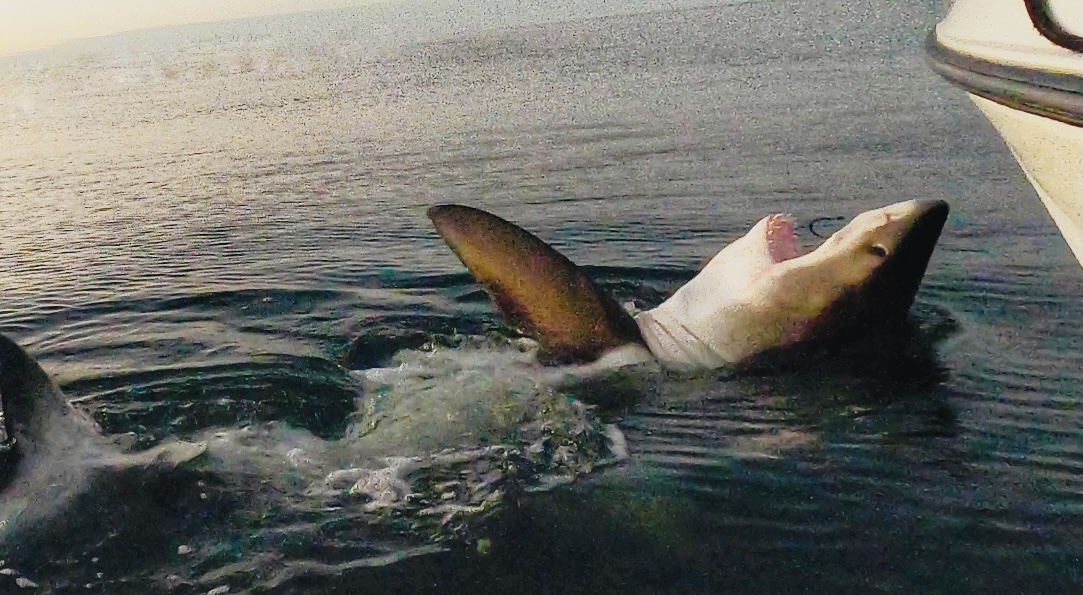 Chip Michalove said he was wrapping up a charter trip, just as the sun was starting to set, when the first monstrous fish tugged the line.

He said the ocean was calm and flat Monday, and suddenly the three men were “battling the baddest fish on the planet.”

He said one of the men was a pastor and also an avid fishermen who had wanted to see a great white shark his whole life.

“We were talking about how this is probably the closest you can get to heaven without crossing over,” Michalove said, describing the rush of reeling in a great white shark.


The first shark spit out the hook and took off, but Michalove and his super-great-white-shark-whisperer senses decided to hang around the spot for a few more minutes.

“We usually get one chance a day to hook a great white. Occasionally we get two, sometimes even three. But very rarely do you see another swim up 45 mins later,” Michalove said. “Seeing another that fast afterwards is an indication they’re all back.”

Michalove works to ensure the process and methods he uses to catch great white sharks on rod-and-reel puts minimal stress on the animal.

Every time Michalove catches a great white — a feat of its own — he does his best to place a tag on the fish so scientists at the Massachusetts Division of Marine Fisheries can track the shark’s movements in the Atlantic.

But this year, the great white shark schedule is a little out-of whack and they’re behind.

“It was warmer than normal in cape cod this fall. It delayed the migration a little. I think these sharks would stay off Massachusetts all year chasing seals if they could,” Michalove told FITSNews.”Thankfully the nor’easters finally pushed them down here.”

Michalove said his friend in New England told him a seal was just killed in the Cape Cod area last week, which is another indication the great white sharks are running behind.

Michalove estimates that there are around 1,000 great white sharks off the South Carolina coast every winter.

“I’m addicted to it,” Michalove said. “You can’t match the adrenaline rush of being connected to a 2,000-pound fish.”

In January, Michalove named a great white shark after after Grace Sulak, a Bluffton teen who was killed in an unsolved hit-and-run collision on eastbound I-26 in May 2016. As expected, the story about the shark went viral and helped give Sulak’s case the attention it deserved.

Michalove has also made national news for other encounters with the ocean’s most amazing creatures.

Earlier this month, Michalove was lucky enough to spot a mom and calf North Atlantic right whales swimming off the coast of Hilton Head.