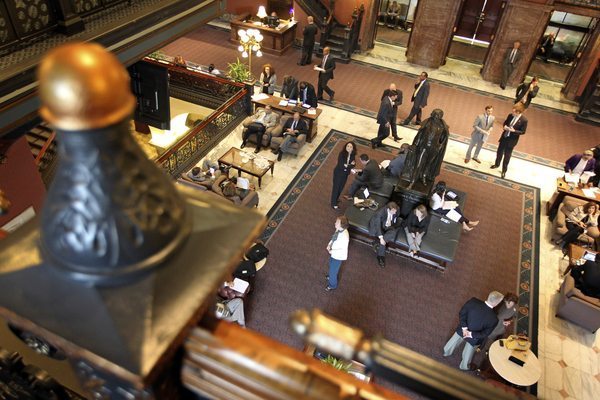 ADDITIONAL LEGISLATIVE SELF-DEALING EXPOSED … BUT WHAT SHOULD BE DONE?

Last month the Center for Public Integrity – in partnership with The (Charleston, S.C.) Post and Courier – published an expose on the extent to which elected officials in the Palmetto State used campaign funds as “a personal ATM,” one that “dispensed nearly $100 million since 2009.”

You can read our recap of that expose here …

This week, the two entities have teamed up for another big dual report on the extent to which lawmakers profit from their connections to government.

“It’s almost impossible to say with certainty how much money flows from government coffers to lawmakers because the state’s reporting laws are littered with loopholes and inconsistency,” reporters Doug Pardue, Glenn Smith, David Slade and Rachel Baye noted.  “It’s a murky system, created by lawmakers, that makes it difficult for the average voter to see just where the money is going and to whom.”

Amen … and the system gets even murkier when lawmakers fail to report income they receive on the side (as governor Nikki Haley infamously did).

Anyway, this band of investigators has unearthed approximately $16 million in contracts with state and local governments awarded to twenty current or former legislators – although again, that’s just what has been publicly reported.

Additionally, fifty-five current or former lawmakers received millions more from entities that lobby state government – and millions on top of that “representing people, businesses or government bodies in government matters, such as worker’s compensation cases and adoptions.”

They even got cash directly “from the very agencies whose budgets they oversee.”  Budgets they often voted for …

“This profit-making out of state and local governmental coffers is perfectly legal in a state where the 170 legislators make and enforce the ethics rules that govern their behavior,” the report concluded.

Exactly … which is why this website has been fighting for years to not only expose the corruption itself, but more importantly the self-policing system that perpetuates it.  We’ve also aggressively exposed the “reforms in name only” lawmakers have put forth as part of a backdoor effort to muzzle criticism of their chronic self-dealing … while giving the appearance of doing something to promote “public integrity.”

We’ve tried to hold this system accountable – and are taking shots because of it.

The result of all this?  A state which literally breeds corruption.

Rumors have swirled for more than a year about the status of an ongoing federal-state investigation into legislative self-dealing, but so far “the probe” has nabbed only one official – former S.C. Speaker of the House Bobby Harrell.

And even this “victory” has raised the specter of deeper corruption.

To be blunt: Harrell’s ethics violations (doggedly pursued by this website) strike us as tame in comparison to some of the taxpayer-subsidized fleecing other state lawmakers are perpetrating.  And his indictment and subsequent resignation from office has only enhanced the political influence of some of these lawmakers.

We’ve asked it before, we’ll ask it again: Is there one honest person in state government?  One official willing to take a real stand against this brood of vipers?

So far the answer to that question has been a resounding “no.” In fact the governor who was elected on a platform of transparency and accountability back in 2010 has been the chief beneficiary of the state’s culture of corruption.

In other words she’s been every bit as disingenuous when it comes to ethics reform as she was on that whole “limited government” schtick.

So we ask again: Who will stand up to this?

Every bit as important as prosecuting existing corruption is fixing the system so that future leaders cannot continue to live off the land.

To that end, two-and-a-half years ago this website proposed a novel two-step process …

The first step? Raising legislative pay so that individuals who serve in the S.C. General Assembly aren’t compelled to cut self-serving backroom deals every five seconds.

Currently state lawmakers make just over $10,000 a year – an amount they can stretch to $30,000 or so annually if they maximize various expenses and allowances. We would propose raising this sum to $50,000 – $60,000 annually – and eliminating all expense payments (in other words lawmakers would have to pay for their own food, transportation and lodging).

Of course that’s not all we would eliminate …

Given their enhanced incomes, lawmakers wouldn’t need to rely on the sweetheart deals and state contracts they habitually award to themselves, their families or their companies. Accordingly, in conjunction with any legislative pay hike, we would institute a lifetime ban on any current or former member of the S.C. General Assembly – or their family members or businesses – receiving a dime of tax money (other than their salary and benefits, naturally).

Or ever becoming a lobbyist.

In other words, give lawmakers a real salary – and then make it illegal for them, their families or their businesses to ever profit off of their office.  The more we watch the naked graft going down at the S.C. State House, the more convinced we are this is a good idea.

The next step?  Eliminating the S.C. General Assembly’s “see no evil” self-policing “ethics” committees.  We should never expect corruption to stop if the same people profiting off of the system are also responsible for policing it.

“The only way to end legislative self-policing is by putting lawmakers under the same laws that govern everybody else,” a recent report from the S.C. Policy Council concluded.  “After all, every other person in South Carolina is independently policed: why should state lawmakers be any different?”

Other sensible reforms?  Imposing term limits on legislative leadership positions and committee chairs.  We no longer believe in term limits for legislators themselves, but lawmakers should not be allowed to wield leadership posts in perpetuity.

Reforms must also be accompanied by real consequences for elected officials who break the law – even just a little, even just once.  Public corruption will never be rooted out if tough new laws included slaps on the wrist for violators.

Betrayal of the public trust should be met with jail time – and lifetime bans on seeking or holding elective office in the future.