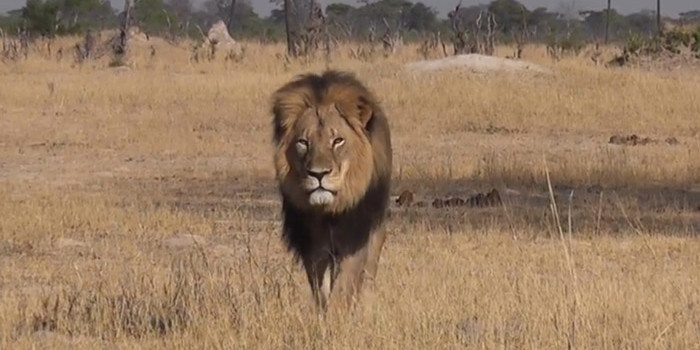 || By FITSNEWS || Earlier this week we wrote a post on the issue of expropriation (or racially based property seizures by government without just compensation) in South Africa.

Boring, right?  Sure … it sucks when we have to call out such radical socialist measures (which are slowly gaining favor in America).

Anyway, in our post about South Africa we noted that “aggressive expropriation has caused a collapse in private investment and a surge in dependency” in neighboring Zimbabwe.

We further noted how expropriation “has also empowered the regime of Robert Mugabe – a brutal tyrant with an abysmal record on human rights issues.”

Well guess what … it wasn’t some douchebag Minnesota dentist who killed “Cecil the Lion,” it was Mugabe – and his socialist redistribution of land.

From Nash Jenkins of Time …

In 2000, Zimbabwe President Robert Mugabe enacted a disastrous land-reform policy. Farms were divided up and nationalized and many plots were handed out to generals and ministers. Thousands of white landowners were violently evicted from their farms, which were then parceled into smallholdings and given to black Zimbabweans. The destruction of property rights led to a disintegrating economy and widespread poverty. Poaching — to feed the insatiable demand for rhino horn and ivory in China and other parts of Asia — became rife and much of the wildlife in Zimbabwe was simply wiped out.

Jenkins goes on to report that prior to Mugabe’s disastrous expropriation, ” Zimbabwe had a successful wildlife-management program, with many big-game animals flourishing.”

Within three years, though, a whopping 80 percent of the animals residing in Zimbabwean safari camps had died.  Within seven years, the number of private game farms (where animal populations were maintained) had plummeted from 620 to only fourteen, according to National Geographic.

With the protection of private game reserves nearly nonexistent, once abundant wildlife began dying off, hunted by desperate farmers with no other options for sustenance …

Despite the passing of harsher laws for poachers in 2011 illegal hunting in Zimbabwe is still big business. Poaching syndicates earn hundreds of thousands of dollars exporting ivory and animal skins. Many conservationists believe allowing the community to reap the benefits of wildlife management — by, ironically, running the sorts of safaris on which Palmer shot his lion — will help curb illegal poaching. But it is impossible to have that debate while the world brays for the ruin of a lone Minnesotan dentist, and fails to criticize a regime whose policies were responsible for the almost complete extinction of Zimbabwean wildlife in the first place.

God gave human beings dominion over animals – although we believe hunting for sport is entirely inconsistent with the Biblical notion of stewardship (or love for Mother Earth or whatever you want to call it).  It’s unnecessary cruelty – killing for killing’s sake – and “big game hunters” like Walter J. Palmer deserve every bit of the scorn they receive.

But the demise of Cecil – who was named, ironically, for the white explorer who founded the former apartheid state of Rhodesia – isn’t about one man killing one lion.

It’s about something much bigger …

Naturally the liberal media – led by The Washington Post – is rushing to portray this “something bigger” according to its own left-leaning narrative.  According to the Post, the story is “about gender roles, gun culture (or bow culture), values, America’s place in the world.”

That’s nonsense.  It’s about a country going to hell … or more accurately, that’s already there.

And more importantly, it’s about why that country is where it is.