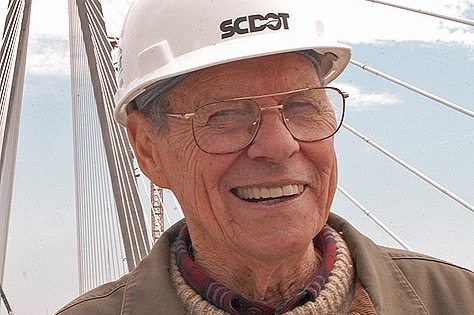 HOW AN ICONIC SPAN IS ABOUT TO BECOME … AN IRONIC ONE

|| By FITSNEWS || We’ve got nothing against Arthur Ravenel, Jr. – a.k.a. “Cousin Arthur.” We’ve always liked him tremendously – even when he chastised our founding editor for running his mouth about his 2007 affair with future S.C. governor Nikki Haley.  And even when he made plain his views on the “late unpleasantness” between the Northern and Southern states (a.k.a. the Civil War).

We realize the former U.S. Congressman/ S.C. Senator grew up in a different era, and his Confederate sympathies (including his membership in the Moultrie Camp of the Sons of Confederate Veterans) certainly need to be viewed in that light.

When we saw the elder Ravenel last spring at his granddaughter’s christening, he was wearing a tie adorned with dozens of tiny Confederate flags – but at the time such a fashion statement was (and maybe still is) harmless.

Although as we noted, perspectives are changing … with good reason.

In the aftermath of this week’s “Holy City Massacre” – the savage, premeditated slaying of nine black church-goers by a 21-year-old white gunman – a unity rally has been scheduled on the iconic Charleston, S.C. bridge that bears Ravenel’s name.

Ravenel’s bridge is certainly an interesting venue for such an event given some of its namesake’s prior comments – including his reference to the NAACP as the “National Association for Retarded People.”  And his subsequent apology … to retarded people.

But this website has blasted the NAACP plenty of times … so what?

Well, there’s also Ravenel’s 1990 quip that some of his white colleagues operated on “black time.”  Meaning they were slow (or “fashionably late” in his words).  Then there’s his underlying rationale for switching to the “Republican” party – which was all about race.

“We didn’t leave the party, really, the party left us,” Ravenel told reporter Anne Hull in 2000. “Southern Democrats had always been very conservative.  But then Kennedy and the leadership of the party became more and more liberal.  The black influence in the Democratic Party is more and more pervasive.”

Ummm … Kennedy?  Liberal?  Not on taxes.  But it’s that whole “black influence” quote that’s probably relevant to this column.

Ravenel was also perhaps the most aggressive supporter of leaving the Confederate flag flying atop the S.C. State House dome (and inside the state’s two legislative chambers).

Take a look at this old news clip … 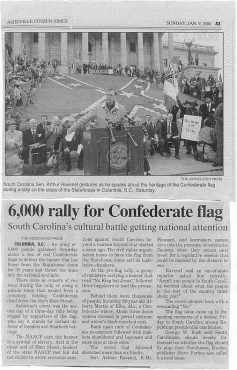 Ravenel has publicly insisted for years that he isn’t a racist – and we’re not going to try and climb inside his heart and pass judgment.  Furthermore, it’s obvious anyone in possession of a heart categorically condemns the sort of hatred that would prompt an individual to go into a house of God and kill nine people in cold blood.

We have no doubt Ravenel vigorously repudiates such violence.  Hell, the 88-year-old may even show up at the unity rally being held Sunday night on his bridge and state his opposition for the record.

But Ravenel’s history on the issue of race – like the history of his home state – is clearly conflicted.  In fact the retired politician’s son – former S.C. Treasurer/ reality TV star Thomas Ravenel – reportedly fought with producers of his Southern Charm reality TV show in an effort to keep any references or depictions of the Confederate flag out of his father’s 2014 cameo on the program.

Like any good son, the younger Ravenel was trying to protect his father … which we respect.

But isn’t that a metaphor for South Carolina’s struggle with its past?

In a larger sense, the unity rally on the Ravenel bridge isn’t – or shouldn’t be – about race.  It’s about people standing together to acknowledge the fact that nine souls were brutally deprived of their most basic human liberty – and to affirm the sanctity of liberty for all people.

Maybe Ravenel is ready to be a part of an event like that … if he is, it would certainly make for a powerful statement in the aftermath of a terrible tragedy.

“Take The Flag Down” Rally Planned For Columbia