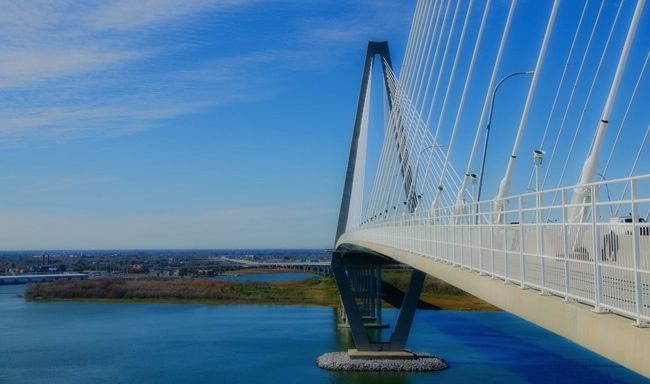 An unidentified person is threatening to jump from the Arthur Ravenel, Jr. bridge in Charleston, S.C. – a developing situation which is snarling traffic for motorists on their Monday morning commute into the Holy City.

Police were called to the bridge at approximately 7:15 a.m., and according to WCSC TV 5 (CBS – Charleston, S.C.) remained there an hour later attempting to resolve the situation. As a result traffic approaching the bridge’s southbound lanes (heading into Charleston from Mount Pleasant, S.C.) was at a virtual standstill.

Here’s a view of the scene from a S.C. Department of Transportation (SCDOT) traffic camera. 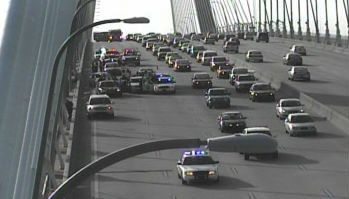 At least ten people have plunged to their death from the Ravenel bridge since it opened in 2005. Jumpers who are able to scale the fence and cast off from the iconic structure fall 200 feet, hitting the water below them at an estimated 40 feet per second.

The Ravenel bridge has no emergency phones, nor is it manned by emergency response personnel. There are no safety nets beyond the six-foot fences, either, as these would cause a drag on the structure on windy days.

UPDATE: As of 10:00 a.m., police are still attending to this situation.

UPDATE II: As of 11:45 a.m., police are still attending to this situation. In fact all four southbound lanes on the Ravenel Bridge are now shut down.

UPDATE III: As of 12:30 p.m., the would-be jumper has been taken into police custody and all four southbound lanes on the Ravenel Bridge are open.