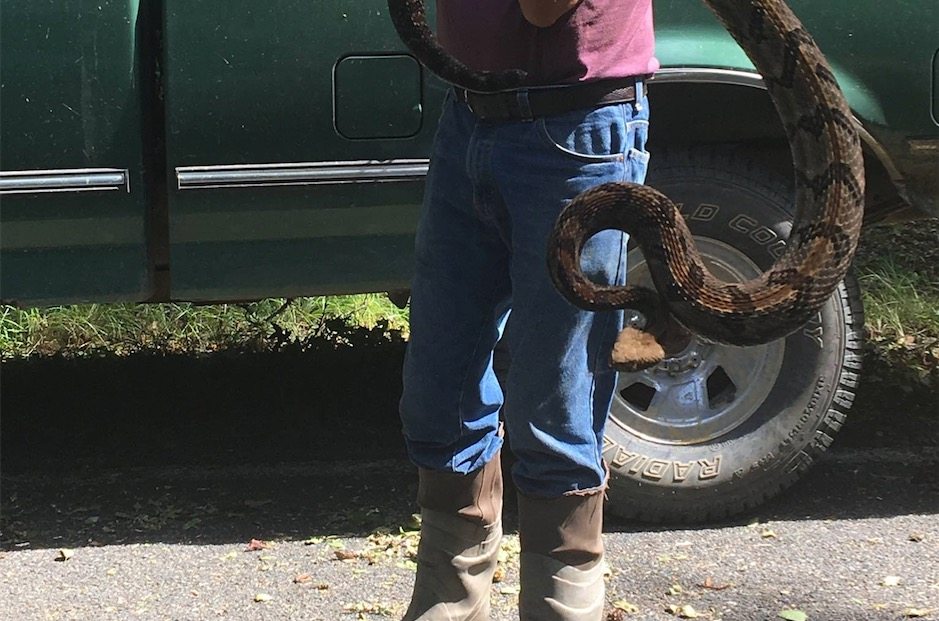 A massive canebrake rattlesnake was found in the South Carolina Lowcountry this Labor Day weekend – just around the corner from a reptilian museum that may wind up serving as the serpent’s new home.

As Elliott kept a close eye on the reptile, she placed a call to Heyward Clamp – one of two brothers who run a nearby snake museum called the “Serpentarium.”

Clamp and his brother opened their facility in 1999 and dedicated it to the “recognition, preservation and study” of reptiles.

Clamp estimated the length of the snake at approximately five feet (or 60 inches) – putting it at the upper end of the reptile’s growth range.  In fact the largest canebrake rattler ever observed (way back in 1956) measured 74.5 inches. 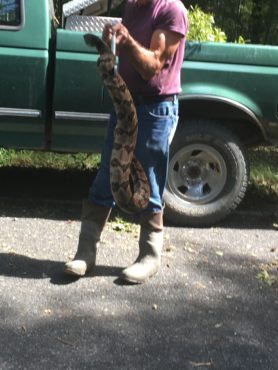 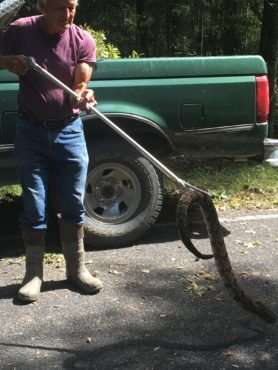 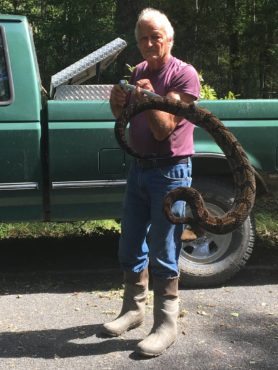 The canebrake – also known as the timber or banded rattler – is a highly venomous pit viper.  It resides in the eastern and midwestern regions of the United States – thriving in a geographic area that spans from Upstate New York all the way to eastern Texas.

Dubbed Crotalus horridus (how’s that for a menacing-sounding scientific name?), it preys on small mammals, birds, frogs and other snakes.  While canebrakes have some of the most lethal venom of any snake in the world, they are generally viewed as less aggressive than other vipers – preferring to avoid hostile encounters.

“I can offer firsthand evidence that the snakes are not unnecessarily aggressive,” one New York State outdoorsman wrote on his blog.  “They are wary and reclusive. They would rather escape than strike.”

Canebrakes prefer rattling, coiling and feinting strikes as opposed to actually delivering a lethal blow – which is good news for humans who encounter them.

This particular snake won’t be doing any rattling, though.

As you can see from the images provided by Elliott, it is missing its trademark rattle – although it’s not immediately clear whether the missing rattle is due to an injury or some sort of birth abnormality.

Either way, this particular snake has clearly done very well for itself.

“A fine specimen,” Clamp said of his latest catch, which is likely headed to a new home at his facility – located just around the corner from where the snake was found.

According to its website, the Serpentarium is a “modern indoor facility and beautifully landscaped outdoor gardens (which) house a wide variety of reptiles, mostly those collected by the Clamp brothers and native to the southeastern United States.”

“The reptiles in the outdoor gardens are not displayed behind glass but are viewed by visitors who look over low-walled enclosures to observe the snakes living in streams, climbing in trees or basking on stumps or logs exactly as they would be seen if encountered in the wild,” the site continued.