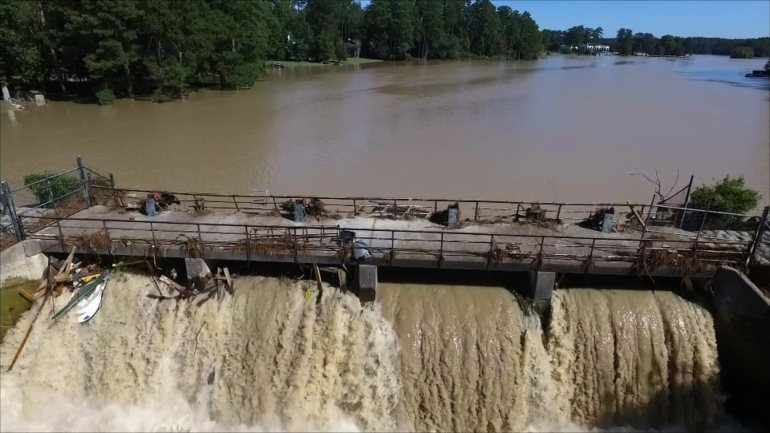 South Carolina’s Department of Health and Environmental Control (SCDHEC) conducted an extensive review of dams in the Palmetto State beginning in 2013 – and found multiple structures in need of repair and reclassification.

Obviously there’s no way of knowing whether the agency’s findings would have prompted changes sufficient to mitigate the impact of “Floodmaggedon” – nor is there a consensus yet as to what sort of oversight state government ought to have over dams on private property.

We have always subscribed to the belief that government existed to protect liberty and property – and that one person’s liberty ended at the point it threatened the life and property of another.

Where is that point?  It often depends …

What we do know?  At least eleven dams in South Carolina have breached in the aftermath of this week’s disastrous storm – causing widespread devastation.

And a massive bill for taxpayers …

“The combination of multiple days of torrential rainfall alone may have contributed to softening up earthen dams,” AccuWeather’s senior meteorologist Alex Sosnowski said this week. “The long duration of the high water is putting pressure on the earthen dams to the point of failure.”

Anyway, during the SCDHEC study – initiated during the tenure of former agency director Catherine Templeton – each dam had to be reviewed and assigned a new classification.  Many dams were reclassified as “high hazard” during this process because of new development erected downstream in the years succeeding the previous review.

Agency officials referred to the study as “a statewide inventory and reassessment,” its goal being the protection of “life and property” located in the floodplains below the dams – lives and property that weren’t there the last time anyone bothered to look.

Some dams were actually shut down and owners were required to provide engineering reports before they reopened.  Dams newly classified as “high hazard” were subjected to more stringent reviews and engineering inspections.

Needless to say, the agency’s efforts didn’t go over well with politicians.

“Ironically, their chief complaint was property values being lowered because it was so unsightly,” one source close to the agency told us.

Again … would it have mattered?

“No amount of inspection or engineering edification would have prevented what happened,” the source said, adding, “the very fact that most Columbians don’t have flood insurance is an indicator of how unique this situation is.”

Anyway, expect this issue to be raised again as dams across the Palmetto State continue to buckle and break under the weight of storm water.