|| By FITSNEWS || U.S. Rep. Mark Sanford and his chief of staff – Scott English – are sweating the July 2015 release of a “fictional” book by one of the former governor’s ex-staffers.

Entitled “The Speechwriter: A Brief Education in Politics,” the book was written by Barton Swaim – who worked for Sanford from 2007-11, during his second term as governor of South Carolina.  And yes, that’s right smack dab during the middle of Sanford’s first political implosion.

Swaim’s book – which is available for pre-order on Amazon – is described as “an intimate and hilarious look inside the spin room of the modern politician: a place where ideals are crushed, English is mangled, people are humiliated, and the opportunity for humor is everywhere.”

The book describes a fictitious governor (modeled after Sanford) as “a charismatic maverick who goes up against the system and its ways, but thinks he doesn’t have to live by the rules.” 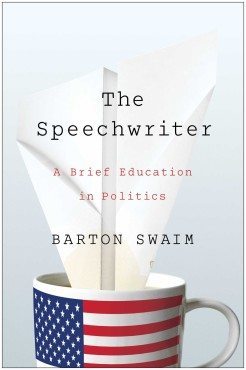 According to the Amazon pre-order page, the book “tells the story of a band of believers who attach themselves to this sort of ambitious narcissist.”

Chief among them?  English – who began working for Sanford during his first stint in the U.S. Congress from 1995-2001.  And who has remained fiercely loyal to Sanford ever since despite bearing the brunt of his mistreatment of staff.

“Through his three years in the office of a controversial governor, Swaim paints a portrait of a man so principled he’d rather sweat than use state money to pay for air conditioning, so oblivious he’d wear the same stained shirt for two weeks, so egotistical he’d belittle his staffers to make himself feel better, and so self-absorbed he never once apologized to his staff for making his administration the laughing stock of the country,” the pre-order page continued.

“This is the truest book I’ve read about politics in some time, hilarious and sordid and wonderfully written,” Klein wrote in his review.

Author Jonathan Alter is also favorably disposed to the book, praising it for capturing – among other things – “the exquisite torture of working for a narcissistic and unappreciative boss.”

“Politicians don’t always come with warm smiles and narcissistic dispositions, but it was Barton Swaim’s bad luck to work for one, and our good luck that he stayed long enough to tell his very funny tale,” he wrote.

Who isn’t looking forward to the book’s July 14 release?  Sanford.

Nor is English, whose fawning, borderline “battered housewife” persona is depicted through a fictitious character in the book named “Stuart.”

Another Sanford supporter – S.C. Senator Tom Davis – is depicted in the book through a fictitious character named “Rick.”

FITS reached out to Swaim – who currently works for the S.C. Policy Council – for more details on his forthcoming book, but he declined to discuss it with us on the record.

Guess we’ll have to wait for this summer to see how much damage this account does to Sanford … who of late has decided to shed his “principled” political roots in exchange for political whoredom.

Making him nothing but a narcissist.