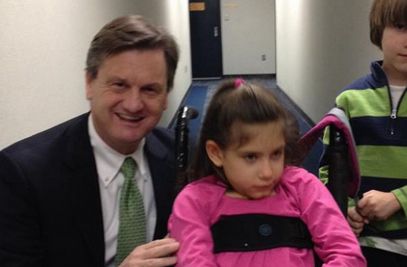 THIS IS WHY GOVERNMENT NEEDS TO GET OUT OF THE WAY …

|| By FITSNEWS || This website has long advocated for the legalization of marijuana and other drugs – for both medical and recreational purposes.

Why?  Because we believe in liberty, that’s why … and as long as someone isn’t violating someone else’s liberty, then government shouldn’t dictate to private citizens what they can or cannot do within the privacy of their own home.  Nor should they unduly restrict commerce in the names of protecting consenting adults from themselves.

We’re a million miles away from such common sense in South Carolina, but thanks to the efforts of S.C. Senator Tom Davis the Palmetto State is at least letting doctors prescribe cannabinoid oil to people who suffer from specific types of seizures.  You know, people like seven-year-old Mary Louise Swing, who suffers from epilepsy – a neurological disorder that causes frequent, repetitive seizures.

Prior to receiving cannabinoid oil treatments, Swing had been suffering as many as 200 seizures during a one-hour therapy session.

Today?  Her total seizures are down to as few as eight an hour.

“Why not?  If a doctor thinks it can be of therapeutic benefit?”  Davis asked in a recent medical marijuana feature on WTOC TV 11 (CBS – Savannah, Georgia).  “Why not allow that doctor to authorize a patient to use it?”

Davis is pushing a broader medical marijuana bill this session, and we hope he’s successful in his efforts.

In fact his legislation is also addressed in the WTOC piece …

Props to Davis … and props to the families who stood up for their family members (like Mary Louise) in pushing for the passage of this law.  Also, props to WTOC for telling their story.

In the meantime, shame on the S.C. State Law Enforcement Division (SLED) – which instead of fighting real crime has decided to wage war on Mary Louise’s law.

And shame on narrow-minded state lawmakers who would rather their constituents continue to suffer than receive the benefits afforded by medical marijuana.

according to a recent study reported in the journal Scientific Reports and presented in http://www.fool.com/investing/general/2015/03/01/a-fresh-marijuana-study-reveals-shocking-news-rega.aspx, marijuana is 114 times less dangerous than alcohol and far less dangerous than tobacco. While I admire Senator Davis for his work on legalizing the medical use of cannabis, there is no logical reason to keep the recreational use of marijuana illegal. Doing so continues a foolish loss of revenue from a completely voluntary tax. It also keeps the prisons stocked with persons who, for the most part have done nothing to harm society or violate any valid moral stricture. Continuing to enforce the anti marijuana laws cost valuable public resources that could be better spent, or refunded to taxpayers, elsewhere. I hope Senator Davis will take the bold and helpful step and move to legalize the regulated use of marijuana for recreational as well as medical purposes. At the very least, our representatives and senators need to debate this issue before more otherwise innocent and productive people are labeled criminals and/or hauled off to prison. Anti marijuana laws are a problem, not a solution to anything.

Obviously the point is to make us suffer and have more dangerous substances the legal norm. Hence our packaged food, pharm, alcohol, etc. Obviously

Finally blow hard Davis is doing something worth a dam.

I don’t always smoke marijuana, but when I do…I make sure it’s right before I head out to work at my very important security job.

Legalizing weed will be also great for Rehab Centers. I think I’ll go ahead and buy some stock in some Rehab Programs now.

It could be good for rehab programs. IMO much safer than the Methadone or Suboxone that is legal.