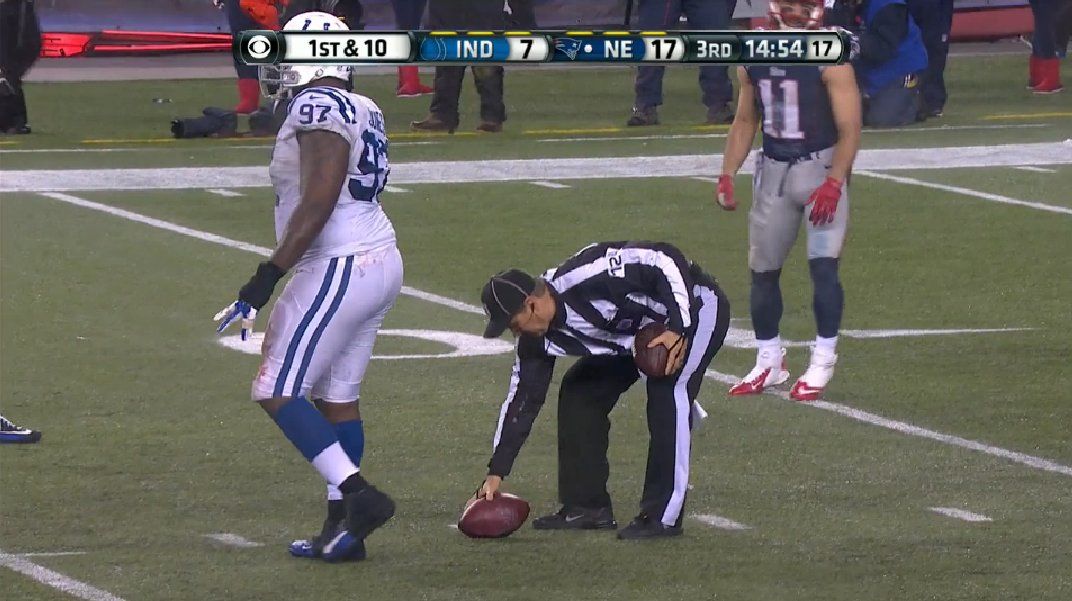 PATRIOTS SHOULD BE FLAGGED …

|| By FITSNEWS || The National Football League has determined that eleven of twelve game balls used by the New England Patriots during this year’s AFC championship game were “inflated significantly below the (league’s) requirements.”

The Patriots’ balls were inspected (don’t laugh) by NFL referee Walt Anderson roughly two-and-a-half hours before kickoff – and deemed to have been up in compliance.  Anderson marked the balls to signify their readiness for play and returned them to the team.  And of course the NFL forbids teams from altering game balls in any way once they have been marked for play.

Fast forward to the second quarter of the championship game – in which the Patriots handily defeated our founding editor’s beloved Indianapolis Colts 45-7.

With the Patriots leading 14-0, Colts’ linebacker D’Qwell Jackson intercepted a pass from Patriots’ quarterback Tom Brady.  After returning to the sideline, Jackson gave the football to a member of the Colts equipment staff, who noticed it wasn’t properly inflated.

That prompted the league’s investigation – which is now attempting to determine exactly how all but one of the Patriots’ balls wound up being deflated in the period leading up to kickoff.

Why would a team take some air out of its footballs?

Under-inflated balls are easier for players to grip – especially in slick, rainy conditions like those that prevailed at Gillette Stadium on Sunday evening.  They’re also easier for wide receivers and running backs to catch.  Brady has made his preference for under-inflated footballs well known, telling a New England radio station in 2011 “I like the deflated ball.”

Now – assuming the Patriots deliberately under-inflated their footballs, did these actions contribute to the outcome of the game?  Yes.  Of course they did.

Did they change the outcome of the game?  That’s unlikely.  The Colts simply couldn’t generate any offense, nor were they able to contain the Patriots’ ground game – which is far less prone to the impact of manipulated footballs.

“They could have played with soap for balls and beat us,” Colts’ tight end (and former Clemson University star) Dwayne Allen tweeted.  “Simply the better team.”

He’s right … but that’s what makes the Patriots’ latest alleged cheating incident so disturbing: They didn’t have to do it.

We wonder … how long have the Patriots been deflating balls?  Because similar allegations surfaced back in November when the Colts played in New England.

Bottom line?  The Patriots have a history of cheating – one that appears to be alive and well.

New England is – year-in, year-out – one of the most talented teams in the league.  And Brady is without question one of the greatest quarterbacks in the history of the league (and hands-down the NFL’s best-ever post-season passer).

But the Patriots continue to sully the integrity of the game with their unnecessary and unsportsmanlike efforts to gain an unfair competitive advantage.

@fitsnews bias in journalism alive and well at Fits, yell if your shocked,(crickets)

@fitsnews @KelticSC @Colts @Patriots You're still biased. Just transparent about it. Which is really all anyone should ask of journalists.

If You’re Tired Of “Deflategate”