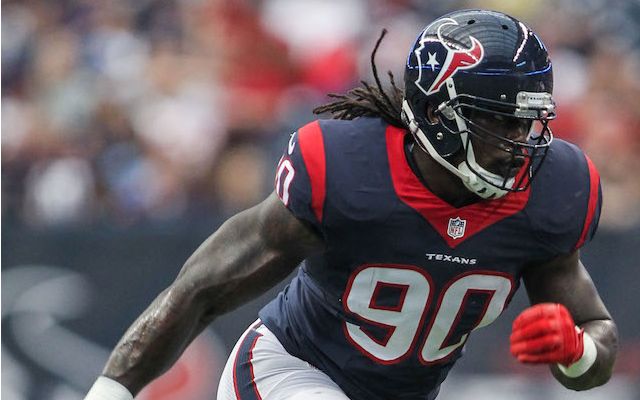 TOP DRAFT PICK TO UNDERGO SECOND SURGERY ON HIS KNEE

By FITSNEWS || Former University of South Carolina All-American Jadeveon Clowney – the No. 1 overall pick in the 2014 NFL draft – is officially done for the year.

The Houston Texans announced this week that Clowney would be placed on injured reserve for the remainder of the 2014 season.  The 6-foot-6, 270-pound defensive end suffered a meniscus tear during his NFL debut that required surgery and hasn’t been the same player since.

He returned seven weeks later, but was struggling to recapture his trademark explosiveness off the line and was experiencing swelling in his knee.

According to ESPN.com, “after meeting with renowned orthopedic surgeon James Andrews on Wednesday, it was determined that Clowney needs a second surgery on his right knee.”

Texans’ head coach Bill O’Brien declined to say what specific procedure Clowney would have – but the team is hoping he’ll be able to use the offseason to rehabilitate the injury.

“This guy’s a football player. He wants to play football, he wants to be good. He was disappointed,” O’Brien said of his team’s top pick.

According to a report published by NFL.com last month, the Texans are beginning to show signs of frustration with their talented rookie – who signed a fully guaranteed $22.3 million contract with a $14.5 million up-front bonus earlier this year.

“What they want is for him to start showing some maturity and learn to play through these some of these ailments,” NFL.com’s Ian Rapoport reported, adding the Texans’ coaching staff had become “frustrated” with their top pick.

So far, the NFL press is giving Clowney – whose work ethic was questioned during his college career – the benefit of the doubt.

“There isn’t much Clowney could do,” columnist Frank Schwab of Shutdown Corner noted. “If his injury is severe enough to require a second surgery, it’s hard to believe he was milking anything. But the dream of seeing J.J. Watt and Clowney terrorizing offenses will have to wait another year.”