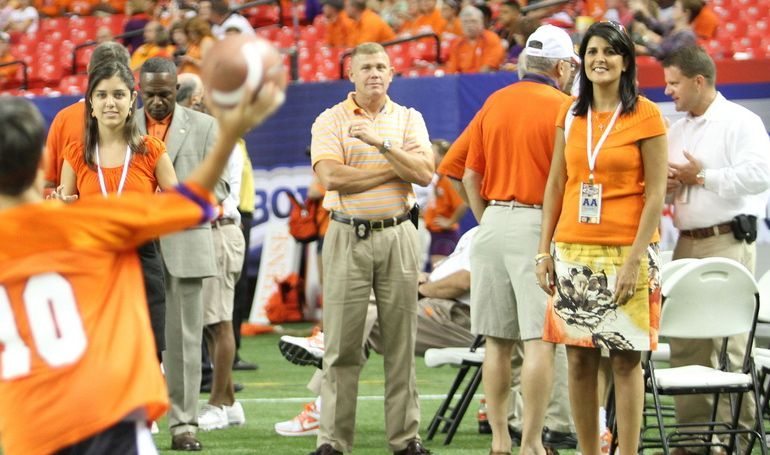 By FITSNews  ||  Three years ago, S.C. Gov. Nikki Haley made national news (not necessarily the good kind) when she instructed employees at her cabinet agencies to begin answering the telephone with the expression “It’s a great day in South Carolina.”

Mmmm-kay.  Never mind that the Palmetto State’s income levels haven’t budged since then … and its workforce as a percentage of the population has shrunk to record lows.  And that it’s government-run education monopoly is still … well …

In other words it’s NOT  a great day in South Carolina, people … no matter how hard Haley tries to convince us otherwise with her demonstrably false claims.

So … what should be done with Haley’s signature catchphrase?  Should we just ignore it?  Sit around and wait (four years?) for a governor with actual ideas and not more of this rinse/ repeat “fake it till you make it” mumbo jumbo?

As much as we’d love to throw “It’s a great day in South Carolina” into the round file of failed political psycho-babble, we’ve actually got a better idea.  A much  better idea.

For those of you who didn’t know it, Haley is the state’s No. 1 Clemson football fan.  And the feeling is mutual.  Hell, the Tigers ran “Nikki Haley plays” during their history-making 2012 Orange Bowl … which is pretty cool, at least until you contemplate the sort of history they were making.

Anyway over on the Left Coast, the “other” USC – a.k.a. the University of Southern California – has an expression for when its football team wins (and its arch-rivals UCLA and Notre Dame both lose).  When that happens, according to USC announcer Pete Arbogast, it’s a “perfect day.”

The University of South Carolina doesn’t have two arch-rivals, but it does have Clemson … and it does have a Clemson-loving governor who won’t shut up about what a “great day” it is.

Don’t look now, but we may have just started something, people.

And while you have to go back to November 2011 to find the last “perfect day” in Southern California, the last “great day in South Carolina” was two days ago.

Maybe this tradition will catch on, maybe it won’t … but in a rivalry that’s become increasingly relevant nationally (yet is still seriously lacking on the branding front) this represents our humble contribution.

Was the Nikki play Clempsun ran a Trik play? Or did it turn trick?

Well I’ll admit to be more than a little curious, as to how much “Annie Oakley” she can put into her “COWGIRL” routine?

Liliya77 Carson. you think Richard`s remark is amazing, last week I bought a brand new Mitsubishi Evo after making $9971 this-past/4 weeks and-just over, 10 grand last-month. this is certainly the most-rewarding I’ve had. I began this 5 months ago and pretty much straight away was bringin in more than $81 p/h. I follow the details on this straightforward website———(To open copy full link including ?. )

“how much Annie Oakley” she can put into her “COWGIRL” routine?”

Well that, and sometime forgot to tell her that the look she’s going for doesn’t involve an actual bovine.

Upon further reflection, I believe her assets would be best brought to bare in the
“REVERSE COWGIRL”!
YOU BETCHA!

any stories or stories that disappear without a trace?

Is that a Rorschach test on her skirt? Who did that? I heard she has a big bush,and it smells bad.

Did Sic Willie tell you that in his book?

I don’t think he got that far

I guess your “great day” dichotomy is really only true if you’re a cock fan.

But one thing is for sure…the rivalry won’t be increasingly relevant if 1) Clemson can only beat teams like SC State, and 2) South Carolina can barely get by teams like Vandy.

As long as there are The University and Clemson and they play each other and the state of South Carolina exists, this will be a relevant rivalry to the citizens of this state no matter the caliber of teams they win or lose to.

That’s not what he stated…”but in a rivalry that’s become increasingly relevant nationally”
Nobody outside of SC gives a damn. And the Ohioans who moved here only care because they don’t know any better.

And my comment was, “this will be a relevant rivalry to the citizens of this state(underline).”

Its a great whey Haley is out of office……:(

Well, we know that she will have another 4 yrs. as governor of SC. You might
as well get use to it.

It will truly be a “Great Day” when this witch is gone!!!!

Haley’s daughter is a looker; splitting image of her mom.

“Don’t look now, but we may have just started something, people.Read more at https://www.fitsnews.com/2014/09/22/great-day-south-carolina/#tAiGJqzAKv4RLYaA.99”

Not a flattering picture of her. Too bad the bubble butt has burst…

Anybody know when that photo was taken? It’s definitely not recently.