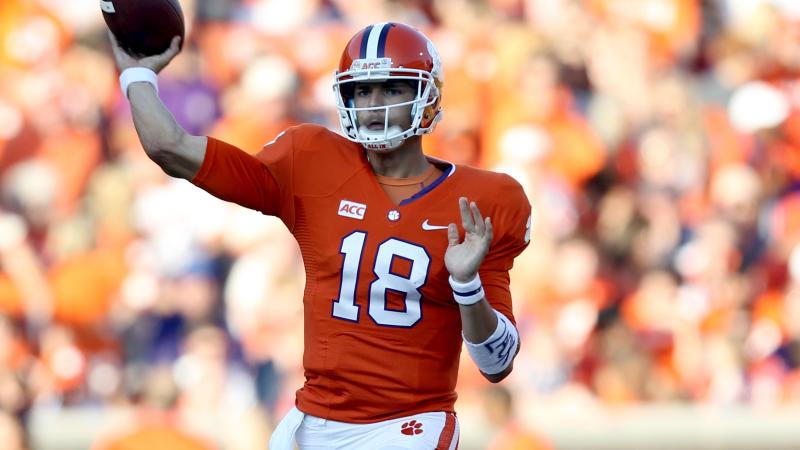 A friend of ours was attending a social event this week when some of the young ladies in attendance began debating who was better looking: Clemson University quarterback Cole Stoudt or University of South Carolina signal-caller Dylan Thompson.

We were tempted to run a poll on that very subject – but then we were forwarded one of the websites these ladies were perusing in pursuit of their elusive truth … www.KennethInThe212.com.

Written by Manhattan author/ editor Kenneth Walsh, “Kenneth in the 212” is focused on the author’s gay man crushes … which include famous athletes.  And guess what … one of Walsh’s tipsters urged him to keep Stoudt “on your radar screen.”

“I know he will not replace (New York Jets’ wide receiver) Eric Decker in your football list, but something new for you,” the tipster wrote.

“Indeed!” Walsh wrote back, posting several fetching pictures of the Clemson quarterback (and one of his father, former NFL quarterback Cliff Stoudt). “He’s definitely a chip off the old block.”

Hello, Tiger!  Oh you sailor, you!

“I bet that dude in New York has no idea that in South Carolina, college football is a blood sport and a religion,” our source said.  “Grown women arguing at a happy hour cocktail party over whose quarterback is the better looking.”

Exactly … the only question left is how Stoudt and Thompson “measure up” to Decker, who is reportedly … um … well, hung.  Or just “well hung.” No comma.

Thompson’s ninth-ranked Gamecocks open their 2014 season this evening against No. 20/21 Texas A&M at home.  Meanwhile Stoudt’s No. 16 Tigers travel to Athens, Georgia Saturday to take on the twelfth-ranked Georgia Bulldogs.  The USC-Texas A&M game kicks off at 6:00 p.m. EDT on the new SEC Network, while Clemson-Georgia will be televised on ESPN with a 5:30 p.m. EDT kickoff.

UPDATE: For the record, Stoudt bulked up to 231 pounds this offseason.  We’re sure Walsh will give his thoughts on where the additional 26 pounds went, right?

Quarterbacks In The News …

Dylan Thompson is openly evangelical Christian, a real turn off to the politically correct.

Wasn’t Shaw the same way, though?

I think their religion permits them to have sex with their girlfriends if they promise to marry them and claim to be engaged. Whatever.

“***openly*****evangelical Christian” WHAT? Did he come out of the closet?

There is hope for Kenneth and Dylan.
http://gayevangelicalchristian.blogspot.com/

After getting spanked by the Aggies, I expect Dylan Thompson might become an atheist. God sure wasn’t listening to his prayers.

“Dylan Thompson is openly evangelical Christian, a real turn off to the politically correct.”
I wasn’t turned off at all – I was more perplexed than anything else trying to figure out why Thompson kept pointing towards the sky after every touchdown.
I knew that God apparently helped folks drive as in “God is my co-pilot” (although judging from the Sunday drivers pre and post church God must not be that good of a co-pilot) – but was not aware that God was a co-quarterback – at least not at the college level. And quite frankly I have a hard time believing that God would be chanting “You can’t lick our cocks” but who knows . . .

Perhaps this gay blog needs to look at Sic Willie’s site and see the man crushes he has on T Rav, carpetbagger Davis, Ron Paul, etc. But then again they probably have already looked and when they saw Sic Willie’s picture they moved on.

Re: Sic Willie…Skinny-fat doesn’t cut it with that crowd.

“But then again they probably have already looked and when they saw Sic Willie’s picture they moved on.”
Oooh – now that is just mean,

As long as Stoudt isn’t oiled up wearing Speedos.

If he’s gay, ain’t nothing wrong with that. I personally don’t like the sight of another dude’s butt or dong… but to each his/her on.

I’ve known people from an early age that are gay/lesbian and you could tell way back in elementary school that they were gay. Gay people are born that way and they are human. So some of you angry people like Tango and Sandi should do unto others as you would have them do unto you.

Stoudt is more handsome than Thompson, though both are pretty nice. We girls at the statehouse – on this wasted day – Harrell brought “them” back in for nothing – so we looked at all the online pics we could find. It was a close vote here on the 4th floor of one of the buildings – we know who we are – and Stoudt won. Now, one of the girls claims she knows “for fact” that Dylan has a hairy chest like the hottest Gamecock of all time had – Ryan Succop. If that pic comes in, some of the votes may change….. It was a fun diversion on a waste of time day in the Statehouse complex. Thank you, Billy. I knew you when….

Really, someone is posting on how well an athlete is endowed? And I thought the incessant bragging about “tahoeing” Gov. haley was scraping the bottom of the barrel. Always keeping it classy eh Fits?