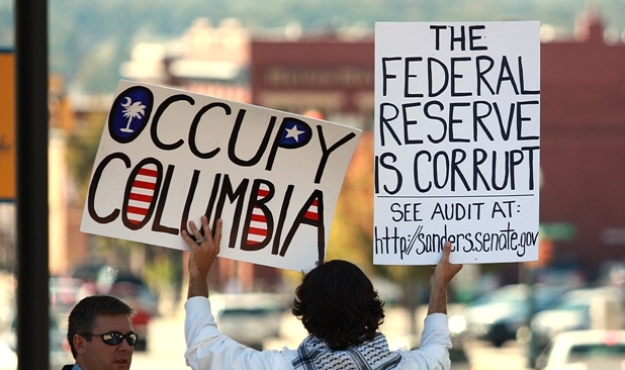 And they continue losing …

This week, the U.S. Fourth Circuit Court of Appeals in Richmond, Virginia affirmed a lower court ruling which concluded that Haley violated the First Amendment rights of the Occupy protesters.  In other word the governor is 0-for-2 in using your money to argue that she had a right to suppress the free speech of an organization she disagreed with (imagine that).

“The Occupy Columbia protesters have stated a viable claim that (Haley and other state officials) violated their First Amendment rights to assemble and protest peacefully on the grounds of the South Carolina State House in the absence of a valid time, place, or manner regulation,” the Fourth District court found. “There were no existing time, place, and manner restrictions on the protesters’ First Amendment activities on the State House grounds. Therefore, Appellants violated these rights by removing the protesters from the grounds.”

Cut and dried, right?  Right … unless of course you’re a “Tea Party” governor looking for something to distract impressionable voters from your real record.

Two years ago, U.S. District Court Judge Cameron Currie ruled that the Occupy Columbia protesters have a right to remain on the grounds of the S.C. State House at any hour of the day or night – with their tents and sleeping bags.

Currie’s ruling was issued a month after Haley had nineteen protesters arrested for refusing to “peaceably disassemble.”

Haley claimed she had “qualified immunity” for the arrests.

“The problem is that if the government had qualified immunity from suits alleging constitutional rights violations, then people wouldn’t really have rights because there would be nothing to stop the government from violating those rights,” one legal analyst told FITS.

As we reported exclusively two years ago, though, the real scam here is the taxpayer money that’s being wasted on attacking this movement (which was a dud from the beginning).

Seriously … Haley could (and should) have simply ignored Occupy Columbia.  Doing so would have saved us hundreds of thousands of dollars.

But she was intent on picking a fight … with our money.

After Haley ordered the eviction and arrest of the protesters, the S.C. Budget and Control Board (SCBCB) – the quasi-legislative, quasi-executive agency in charge of the State House grounds – was sued. At that point, officials with the state’s insurance reserve fund concluded that the claims being made against the state were covered under the SCBCB’s policy –  meaning Haley’s legal bills would be paid for by taxpayers.

Haley didn’t want the state’s attorneys to represent her, though, and so she petitioned the S.C. Attorney General’s office for permission to access its “pre-paid legal program,” an additional insurance policy the state operates for workplace disputes.

This petition enabled Haley to retain her own political attorneys (on your dime) – which is interesting behavior coming from a so-called taxpayer watchdog who railed against attorneys throughout her 2010 campaign.

Heck, Haley is still railing against attorneys … or trying to.

Anyway, Haley needs to end this charade.  She clearly violated the First Amendment rights of these protesters via her clumsy eviction – and further appeals will only unnecessarily waste additional taxpayer resources.

Of course Haley has already vowed to take the case “all the way to the Supreme Court,” so we shouldn’t expect common sense to prevail anytime soon …