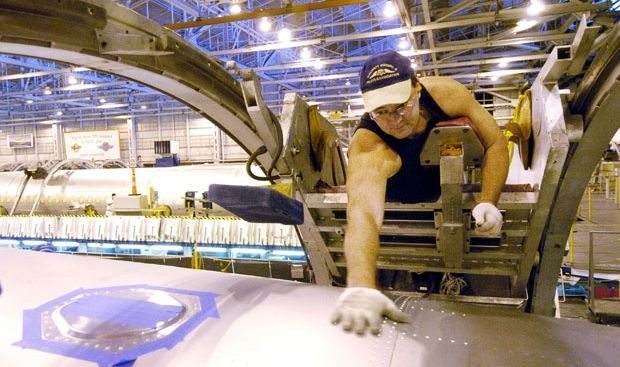 A newly elected Socialist Party politician in Seattle, Washington has a radical idea for workers in the event aircraft manufacturer Boeing moves jobs out of the Evergreen State.

Kshama Sawant – elected last week to Seattle’s city council – believes such a decision by Boeing would entitle machinists to seize the company’s Everett, Washington facility on the principle of “democratic ownership.”

“The workers should take over the factories, and shut down Boeing’s profit-making machine,” Sawant said at a recent organized labor rally, according to KIRO TV 7 (CBS – Seattle).

Her remarks were, according to the station, received by a “cheering crowd.”

Last week, Boeing’s unionized employees emphatically rejected a new labor deal that would have guaranteed placement of the company’s new 777X project in Washington State. As a result Boeing is exploring other locations for this project – including a facility in North Charleston, S.C.

Sawant – who ran on anti-capitalism, workers’ rights, and a $15 per-hour minimum wage – said that “workers have to realize, they have more power than they think.”

Wait … where have we heard that one before?

She said the new “democratically owned” Boeing facility would cease production of “war machines” in favor of “mass transit like buses.”

This website is obviously no friend to Boeing. We believe this crony capitalist company represents everything that’s wrong with our nation’s increasingly command-and-control approach to “economic development.” Accordingly we have little sympathy for its plight – and believe it should be forced to sink or swim on its own merit (without the aid of tens of billions of dollars in taxpayer subsidies).

Having said that, what Sawant is proposing is pure Marxist theft … something that cannot be tolerated under any circumstances.

Big Brother (And A Tax Hike): Coming To Your Car?

Unfettered democracy allows for the usurpation of property rights. It is nothing more than mob rule.

Socialists do not believe in the ownership of the means of production, private capital, etc.

They believe in the ownership of their own labor though, which is an odd incongruity.

I suspect humanity to doomed to repeat this film reel over and over again, never learning from the previous lessons in history. I’m glad she’s at least honest in what she stands for instead of parading around with the “progressive” label. That way everyone knows the deal exactly.

This is a clear bow shot across the bow of both Seattle & Boeing. Prepare for Detroit style generational wealth destruction in the name of government charity with other people’s money. 30 years ago no one could ever guess the wealth in Detroit would virtually evaporate in three decades, you would have been laughed out of the room or put in a straight jacket.

I suspect humanity to doomed to repeat this film reel over and over again, never learning from the previous lessons in history.

As I pass through my incarnations in every age and race,I make my proper prostrations to the Gods of the Market Place.
Peering through reverent fingers I watch them flourish and fall,
And the Gods of the Copybook Headings, I notice, outlast them all.

We were living in trees when they met us. They showed us each in turn
That Water would certainly wet us, as Fire would certainly burn:
But we found them lacking in Uplift, Vision and Breadth of Mind,
So we left them to teach the Gorillas while we followed the March of Mankind.

We moved as the Spirit listed. They never altered their pace,
Being neither cloud nor wind-borne like the Gods of the Market Place;
But they always caught up with our progress, and presently word would come
That a tribe had been wiped off its icefield, or the lights had gone out in Rome.

When the Cambrian measures were forming, They promised perpetual peace.
They swore, if we gave them our weapons, that the wars of the tribes would cease.
But when we disarmed They sold us and delivered us bound to our foe,
And the Gods of the Copybook Headings said: “Stick to the Devil you know.”

On the first Feminian Sandstones we were promised the Fuller Life
(Which started by loving our neighbour and ended by loving his wife)
Till our women had no more children and the men lost reason and faith,
And the Gods of the Copybook Headings said: “The Wages of Sin is Death.”

In the Carboniferous Epoch we were promised abundance for all,
By robbing selected Peter to pay for collective Paul;
But, though we had plenty of money, there was nothing our money could buy,
And the Gods of the Copybook Headings said: “If you don’t work you die.”

Then the Gods of the Market tumbled, and their smooth-tongued wizards withdrew
And the hearts of the meanest were humbled and began to believe it was true
That All is not Gold that Glitters, and Two and Two make Four —
And the Gods of the Copybook Headings limped up to explain it once more.

As it will be in the future, it was at the birth of Man —
There are only four things certain since Social Progress began: —
That the Dog returns to his Vomit and the Sow returns to her Mire,
And the burnt Fool’s bandaged finger goes wabbling back to the Fire;

And that after this is accomplished, and the brave new world begins
When all men are paid for existing and no man must pay for his sins,
As surely as Water will wet us, as surely as Fire will burn,
The Gods of the Copybook Headings with terror and slaughter return!

Very nicely quoted. Thank you, I hadn’t read that before.

A little more on the poem here.

Who knew there was that much of a demand for an airplane company to build mass transit like buses?

What’s really scary, there were enough socialist sheeple in Seattle to elect her.

The executives sign purchasing contracts, purchase orders, and payments. All the executives have to do is not approve the purchase or payment of new materials, and the machinist will have nothing to machine.

Reading what she said the song “One Tin Soldier” came to mind.

Refuse a deal? Sure. Protest? Right on. Strike? Go for it. Take over the factories and do whatever you want with them? Uh, no.
If you would rather make whatever the hell you want, build your own factory and run it yourself.

But they don’t have the knowledge, skills, and abilities to do so.

And they’re special…they have the participation awards to prove it.

They don’t have to achieve, just be awarded.

You’re talking about Boeing management and the billions they just got right? If not you must be standing on your head.

Sounds like she was a recipient of the Knockout Game. As long as Europe’s Airbus is nationalized, soom competition from Atheist Red China too…like no holds barred monied by nation’s tax revenue and slavery, our two aircraft manufacturers Boeing and McDonnel Douglas, civilian and defense production aircraft, are the good guys. States are not immune either. NJ is top dog as far as enticements go…under Christie…big time.

McDonnell Douglas is owned by Boeing.

Not sure why you got a down vote CNSYD, must have been too much information for him/her to digest.

Actually, it turned out to be the other way around.

Well, it worked for GM

…what Sawant is proposing is pure Marxist theft …

In a weird way hearing “pure Marxism” is almost refreshing. Most “Marxists” (MINOS?) want the private executives and owners to be replaced by THE GOVERNMENT (Coincidentally composed of themselves), as opposed to the workers…

She said the new “democratically owned” Boeing facility would cease production of “war machines” in favor of “mass transit like buses.”

Yes, I’m sure Washington’s version of Cletus & LaShonda out on the factory floor will run Boeing better than the executives.

I smell TBG getting rich(RICH, ISAY!! giggles maniacally
) off of a massive short sale of Boeing stock.

I wonder will they be jet powered buses?

No, they will be powered like Bartertown, with the exception being bullshit instead of pig shit.

We should get some socialist politicians here. They might shake things up. They certainly couldn’t do worse than Haley et al.

The problem in SC is the lack of a competitive political environment. The pols in office can do anything or nothing — and still be reelected! If we had a competitive environment, we might find some new ideas and new approaches that would change the lethargic status quo here in SC. Nothing changes here because the same old pols are elected and reelected. I think Haley has been a terrible governor — a living example of cronyism hand-in-hand with incompetence — but she’ll get the nomination and be reelected because we never do anything different.

Yes they could. See Detroit.

“We should get some socialist politicians here.”

We have them, they just don’t wear the label on their sleeve…and it’s not just Dems I’m talking about, it’s Republicans too.

“we don’t need the executives…… executives don’t do the work, the machinists do ” so says Kshama Sawant a Cockroach Politician

“we don’ need the cockroaches…..cockroaches don’t do the work, the taxpayers do” so says an Old White Bastard

I wonder if I am the only person who, when seeing the words “Atheist Red China” or “fiat currency” automatically just skip right over the remainder of the comment???
And btw, Smirks really is the voice of reason on here. Some of you others are nuts!!

Add Sheeple and MSM to the words that make me skip to the next comment!!!

Anything with the word “AThinker” makes me skip over the rest myself, and we all know that my opinion means something.

i don’t care you don’t matter

How’s that capitalism working for you?

Unionists always make the same mistake when dealing with Socialists. When the socialists take over with union help, they always close the unions “for the good of the people.” It happened in Germany, Italy, Spain, and the Soviet Union and its satellites.

I wonder if she’s a good cook? She’s separated! I love Indian food.

One man’s socialism is another man’s capitalism. Boeing takes a billion dollars in SC tax money to build a facility to use as leverage against their own workers on the other coast. So SC is complicit in helping a private business extort their employees. But for some perverse reason those on the right don’t perceive this as tyranny.
At less than one plane per month there’s no way the North Charleston plant is profitable. It has a purpose in Boeing’s scheme but that purpose doesn’t need to fly.

How did this Bitch even get elected? It truly shows the state of our country when people like this are voted in power.

Hey, I wanted to thank Seattle for electing a genuwine Commie! Quite refreshing actually to see a honest-to-god Commie who isn’t afraid to say what they really mean. None of this “progressivism” this and “redistribution” that, but just good ol’ fashioned “kill the evil capitalists and take their stuff”.

Yep, let’s just steal that factory and “convert” it into making VCRs and lectric buses and rainbow generators and Unicorn horseshoes and other useful stuff not used for war, you know, because everyone knows that all factories are completely interchangeable.

Your new Commie’s gonna be providing us with a LOT of entertainment for the next four years!

So thanks again Seattle for lightening things up a bit in the political world! (Oh. Word of advice. Don’t elect a MAJORITY of those like her to city council or you’re gonna be REEEEEEEEALLY sorry!)

Turn the factory’s over to the communist and watch the orders disappear over night.. Tool up for those high demand buses in several years you can sell a dozen so the highly paid workers can get a dime after union dues. Wonder if the Unicorn shoes are rainbow colored? Could be a market in San Fran.