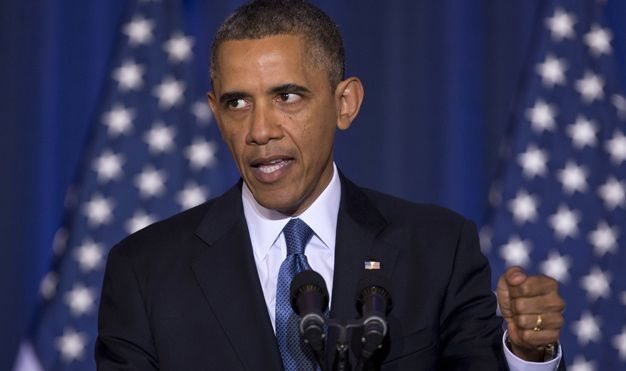 U.S. President Barack Obama blasted his “Republican” antagonists in Washington, D.C. for their positions on the so-called government shutdown and the ongoing debt debate. Specifically, he went after fiscally conservative “tea party” lawmakers – arguing that they were holding the country “hostage” on both issues.

“I’ve shown myself willing to go more than halfway in these conversations, and if reasonable Republicans want to talk about these things again, I’m ready to head up to the Hill and try,” Obama said. “I’ll even spring for dinner again.”

Of course Obama once again made clear that he isn’t going to negotiate (or buy Graham a sorbet) until he gets everything he wants – an end to the “shutdown” and the unconditional surrender of fiscal conservatives on the debt debate. Which makes that whole “more than halfway” rhetoric a bit hard to swallow …

“I’m not going to (negotiate) until the more extreme parts of the Republican Party stop forcing John Boehner to issue threats about our economy,” Obama said. “We can’t make extortion routine as part of our democracy. Democracy doesn’t function this way. And this is not just for me; it’s also for my successors in office. Whatever party they’re from, they shouldn’t have to pay a ransom either for Congress doing its basic job. We’ve got to put a stop to it.”

Wait … extortion? You mean like forcing someone to pay a massive fine if they don’t purchase health insurance? Or trying to block a private company from moving jobs into right-to-work states?

Anyway … Obama was just getting warmed up.

“The greatest nation on earth shouldn’t have to get permission from a few irresponsible members of Congress every couple months just to keep our government open or to prevent an economic catastrophe,” he said.

On the day Barack Obama took office the national debt was $10.6 trillion. Today it is $16.9 trillion. That’s a 60 percent increase in less than five years. In Obama’s first term alone, each American household saw its share of this massive debt burden increase by more than $50,000.

Yet those of us fighting to put the brakes on this unsustainable excess are the irresponsible ones?

With all due respect to Obama, he had it right back in 2006 – when he stood against big-spending Bush “Republicans” and their efforts to raise the debt ceiling.

“The fact that we are here today to debate raising America’s debt limit is a sign of leadership failure,” Obama said at the time. “It is a sign that the U.S. government can’t pay its own bills. It is a sign that we now depend on ongoing financial assistance from foreign countries to finance our government’s reckless fiscal policies. Leadership means that ‘the buck stops here.’ Instead, Washington is shifting the burden of bad choices today onto the backs of our children and grandchildren. America has a debt and a failure of leadership. Americans deserve better. I therefore intend to oppose the effort to increase America’s debt limit.”

Obama wasn’t just saber-rattling either … he followed through on his threat and voted against the debt limit increase.

Funny how the shoe is now on the other foot, isn’t it?