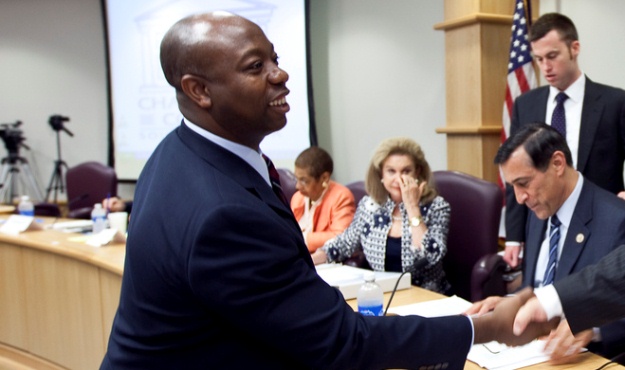 Usually, governors want to be United States Senators – not the other way around. But in the case of newly appointed U.S. Sen. Tim Scott, this traditional power script has always been flipped.

Scott wants to be South Carolina’s first black governor – in fact this was his original goal when he first ran for the S.C. House of Representatives in 2008. The governor’s office was also his ultimate objective when he was elected to the U.S. House of Representatives in 2010, filling the first district seat that sprang Mark Sanford to the top statewide office in 2002.

“He doesn’t like being in Washington,” a source close to Scott tells FITS. “He’s always liked being home.”

Scott’s trajectory skipped a rung on the ladder, though, when S.C. Gov. Nikki Haley tapped him to fill the U.S. Senate seat vacated in January by Jim DeMint.

But what was really behind this history making choice? And was the U.S. Senate what Scott really wanted?  Obviously Scott took the Senate seat – and in the process agreed to be a candidate in the 2014 special election to determine who fills out its final two years (an election will be held in 2016 for a full six-year term). In other words, Nikki Haley took him off the table as a potential 2014 primary rival … even though Scott made it abundantly clear he wasn’t going to challenge Haley in GOP primary.

Of course Haley’s real problem isn’t the GOP primary – it’s her 2014 general election rematch against Democrat Vincent Sheheen. Haley is one of the weakest, most vulnerable governors in the nation, with abysmal approval ratings that have yet to be exploited via an aggressive media campaign. And while she’s got the “Republican” lean of the Palmetto State on her side (and Sheheen’s support of U.S. President Barack Obama’s Medicaid expansion), her reelection is not a sure thing by any stretch of the imagination.

And while we were quick to dismiss Haley’s recent comments that she could “absolutely see” not running for reelection in 2014, it appears others are putting a little big more stock in them.

Or at least a little bit more hope …

“There is a tremendous amount of risk associated with her running for reelection,” one veteran Palmetto politico told us. “If she loses – especially in a state as reliably Republican as this one – she is finished politically. However were she to hand off the torch and focus exclusively on her loftier ambitions, there is still enough of an appetite for female minority candidates at the national level she could tap into.”

Were Haley to decide against running, to whom would she “hand off the torch?”

FITS checked in with several of Scott’s advisors – and heard crickets.

The only one who commented told us bluntly “there is never an upside to engaging hypotheticals such as the one you’ve just outlined.”

Privately, though, several sources in Washington, D.C. tell FITS that Scott’s interest was more than piqued when he read Haley’s comments regarding reelection.

“Let me state this for you as unambiguously as I know how,” one of these D.C. sources told us, “if she’s out, he’s in.”

We ran that quote by another GOP operative who is close to Scott, and heard something similar – albeit not quite as concrete.

“Scott’s team is watching Haley closely,” the operative told us. “And if she’s out, he is likely in.”

One of Scott’s grassroots staffers echoed that sentiment, telling us “the rumor is absolutely true.”

“He’s always wanted to be governor,” the staffer said.

Could we be looking at a major shakeup in 2014?

Despite her terrible poll numbers, atrocious job performance and demonstrated incompetence as a campaigner (Haley coughed up a 20-point lead to Sheheen in 2010 and needed straight ticket GOP voters to pull her across the finish line), we still think the governor runs for reelection. And unless Sheheen demonstrates an as-yet-undisplayed ability to stake out some ideological ground to Haley’s right – he’s never going to beat her no matter how terrible a campaign she runs.

But the possibility of Haley dropping out – and Scott jumping in – is a scenario that’s starting to gain traction.