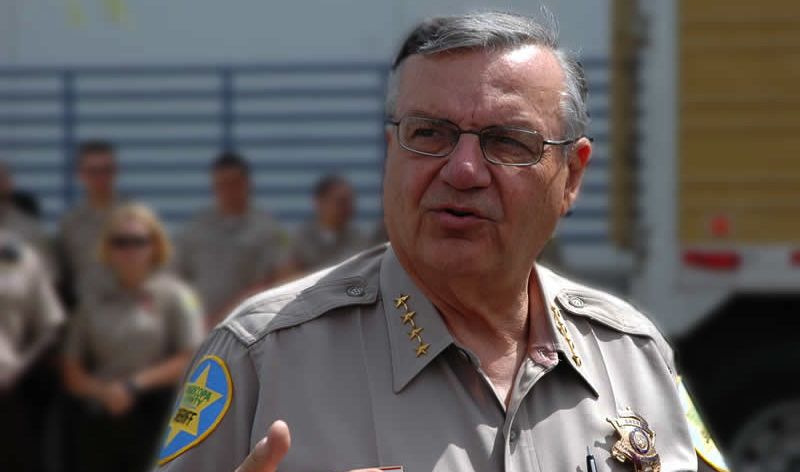 On Friday, a federal judge ruled that Sheriff Joe Arpaio and his deputies violated the constitutional rights of Latinos by targeting them during raids and traffic stops throughout Maricopa County, Arizona. The ruling comes months after a federal civil trial last year in which Sheriff Arpaio and his office were accused in a class-action lawsuit of singling out Latinos for stops, questioning and detention.

It also comes in the midst of a heated immigration reform debate in Congress.

Arpaio, who has been Sheriff of Maricopa County since 1992, is famous for his outspoken stance against illegal immigration and support of Arizona’s controversial anti-illegal immigration act, SB 1070. “America’s Toughest Sheriff,” as he calls himself, is also well-known for forcing inmates to wear pink underwear, live in tents and listen to Frank Sinatra – and for using volunteer posses to protect Phoenix-area students in the wake of the Sandy Hook school shootings.

U.S. district court judge G. Murray Snow’s ruling found that – in addition to constitutional violations – Arpaio focused his department’s resources on arresting illegal immigrants at the expense of fighting crimes. Many of the people targeted by Arpaio’s deputies were actually American citizens or legal residents. The judge found that the sheriff’s department relied on racial profiling – using ethnicity as the primary basis for suspecting that a person was in the country unlawfully – and illegal detentions to target Latinos.

The ruling expounded upon the constitutional violations that Sheriff Arpaio’s immigration enforcement efforts brought on Latinos in Maricopa County. It also used Arpaio’s own press releases and statements to the media to conclude that his office illegally used race as a factor to make law-enforcement decisions.

Snow wrote that to the extent that Arpaio’s policy “uses race as a factor in arriving at reasonable suspicion or forming probable cause to stop or investigate persons of Latino ancestry for being in the country without authorization, it violates the Fourth Amendment. In addition, it violates the Plaintiff class’s right to equal protection under the Fourteenth Amendment to the Constitution and Title VI of the Civil Rights Act of 1964.”

No monetary damages were sought by the plaintiffs. Instead, they wanted – and got – an injunction that prevents Maricopa County from using “using Hispanic ancestry or race as any factor in making law enforcement decisions pertaining to whether a person is authorized to be in the country.” The sheriff’s office is also prohibited from reporting a vehicle’s Latino occupants to federal immigration authorities or detaining, holding or arresting them unless deputies have reasonable suspicion that the occupants are violating the state’s human-trafficking and employment laws or committing other crimes.

A lawyer for Maricopa County denied that race was used to make law enforcement decisions and said that the department would appeal the court’s ruling, but it would comply with the terms of the injunction in the meantime.

In a statement to The New York Times, Cecillia Wang, director of the Immigrants’ Rights Project at the American Civil Liberties Union (ACLU) – one of the groups that brought the lawsuit against the Maricopa County Sheriff’s Department – hailed the ruling.

“Let this be a warning to anyone who hides behind a badge to wage their own private campaign against Latinos or immigrants that there is no exception in the Constitution for violating people’s rights in immigration enforcement,” she told the paper.

Allison: Another View On IRS Scandal