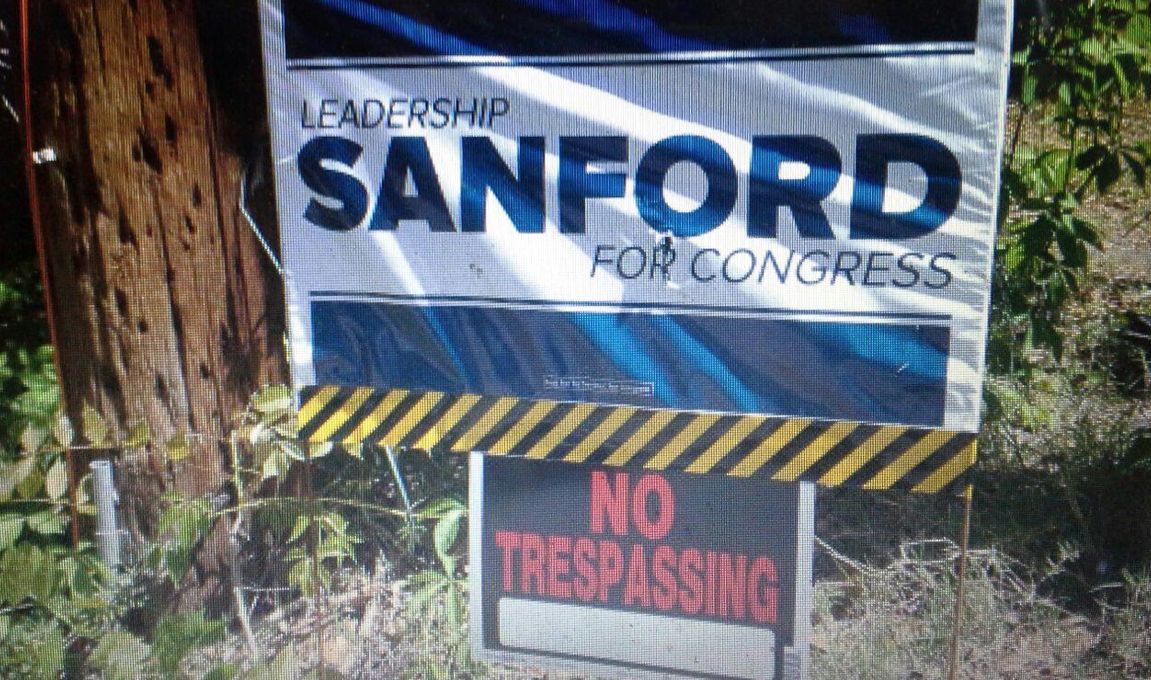 Former S.C. Gov. Mark Sanford’s campaign placards are being adorned with “No Trespassing” signs in the wake of reports that he trespassed on his ex-wife’s Sullivans Island, S.C. property without her permission – violating the terms of their 2010 divorce agreement.

Sanford – who is locked in a tight race for South Carolina’s first congressional district – has acknowledged being on Jenny Sanford’s property without her permission on at least one occasion. He says he was there to watch the Super Bowl with his youngest son, 14-year-old Blake Sanford.

According to Jenny Sanford’s attorneys, however, Sanford has engaged in a “pattern” of trespassing.

In fact according to CNN’s Peter Hamby Sanford received a “formal notice” from his ex-wife’s lawyer in February of 2011.

“This is a formal notice not to trespass on her property,” Jenny Sanford’s attorney wrote. “(She) intends to enforce any violation of thus request by resort to either the Family Court in a contempt action or a criminal charge for trespass, or both.”

Meanwhile The Politico is reporting that the National Republican Congressional Committee – which wasn’t exactly chomping at the bit to help Sanford in the first place – has pulled out of the race completely. While that might not amount to much practically speaking, it’s certainly “bad optics,” as one Democrat told us.

“Republicans said they were caught off guard by news of Jenny Sanford’s complaint,” The Politico report states. “They worry other damaging revelations about Mark Sanford’s personal life that they aren’t aware of could come out in the coming weeks. The NRCC has spent a nominal amount on the race on polling and other activities. But officials determined that devoting potentially millions more – which was under discussion – isn’t worth it.”

A Sanford internal poll released the day before this story broke had the former governor leading his Democratic rival – Elizabeth Colbert-Busch – by a single digit margin that was “outside of the margin of error” of the survey.

Clearly she’s gotten that … although we’ll have to wait a few days to gauge the full extent of the damage to the “Lov Guv’s” campaign.

Sanford – whose infidelity and subsequent divorce made international headlines in 2009 – is attempting a political comeback by running for the seat he held from 1995-2001, prior to his two terms as governor. And while Colbert-Busch hasn’t addressed the trespassing incident, other Democrats are saying the former governor may have violated criminal statutes as a result of his unauthorized access.

Meanwhile there is all sorts of speculation regarding additional information that may be contained in the Sanfords’ “sealed” 2010 divorce case.