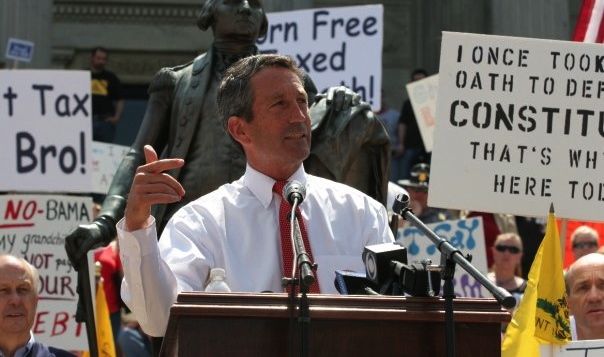 Can former S.C. Gov. Mark Sanford pull off an improbable political comeback and reclaim the U.S. House seat he held from 1995-2001?

Sources familiar with the “Luv Guv’s” recent polling data tell FITS there is a “clear path to victory” for the former three-term Congressman/ two-term governor – although they acknowledge that a Republican runoff election represents a “danger zone” for the scandal-scarred politician. In South Carolina, if no candidate receives more than fifty percent of the vote in a primary election, the top two finishers face each other in a runoff two weeks later.

With a whopping sixteen GOP candidates seeking the first district seat vacated earlier this year by newly appointed U.S. Sen. Tim Scott, it’s highly unlikely any candidate will win on the first vote – scheduled for March 19. That means the top two vote getters would face each other on April 2.

According to our sources, Sanford’s negatives are in the “low thirties” among Republican primary voters in the South Carolina first congressional district – which is obviously better than his recent statewide showing (polls taken in December showed the governor’s statewide favorability rating among GOP voters at 39 percent, with 44 percent saying they had an unfavorable impression of him).

Also, assuming Sanford wins the nomination would his victory turn a safe Republican seat into a toss-up?

First, how much higher can his negatives be driven? In other words do people already know everything there is to loathe about him – rendering future negative attacks less effective than they otherwise might be?

Second, which of the sixteen candidates will have enough cash to blast Sanford while simultaneously working to build up their own name identification within the district? And what role will third party groups play in that process?

Supporters of the former governor say they are not concerned about making the runoff election – or winning a general election against a Democratic candidate.