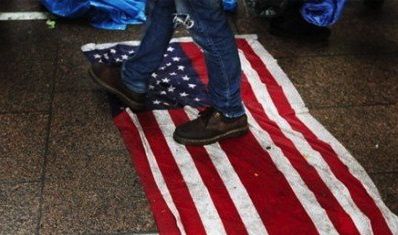 America has devolved over the last dozen years into a welfare statist’s, crony capitalist’s wet dream … and a nightmare for future generations of taxpayers who must ultimately pick up the tab for government’s excess interventionism.

Why, then, would a liberal high school teacher (one drawing a nice government salary with benefits) be moved to stomp on the American flag not once – but several times?

We don’t know, but Chapin (S.C.) High School English teacher Scott Compton allegedly did just that last month – in front of at least three of his classes.  This week, Compton was placed on administrative leave by school officials for his actions.

According to our sources, administrators first learned of the flag-stomping incidents via an email sent from an outraged parent.

We agree with Compton’s take on symbolism – and we support his First Amendment right to do whatever he wants to an American flag – but such behavior hardly seems appropriate in a school setting.  In a private school?  Whatever … he’s accountable to the marketplace.  But in a public school?

Sources at Chapin High School tell FITS that Compton is a “good teacher” but that he is “very liberal.”

“He wears it on his sleeve in the classroom,” one source said.

Chapin High School is part of Lexington-Richland (S.C.) School District Five, which made waves last October when it attempted to remove the Pledge of Allegiance from its classrooms.