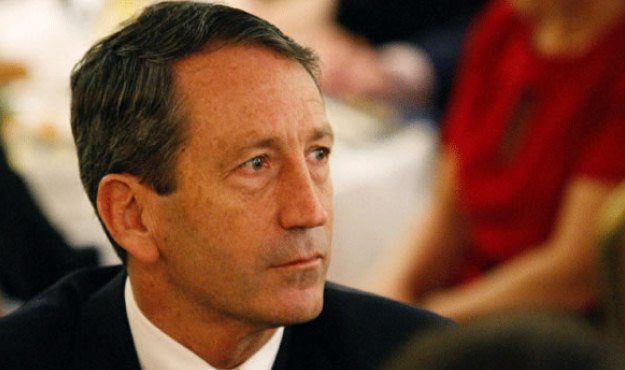 Despite a very poor showing in recent statewide polling, former S.C. Gov. Mark Sanford continues to plot a political comeback.  In fact it’s looking increasingly like the “Love Guv” – who was almost run out of office in 2009 due to complications stemming from an extramarital affair – has his eye on his old digs.

One source tells FITS that Sanford recently told a small group of supporters that he is “ninety percent” committed to running for governor – the office he held from 2003-2011.

Obviously Sanford faces an uphill climb.  According to a new Public Policy Polling (PPP) survey released this week, fifty-three percent of South Carolina voters have a negative opinion of him compared to just 30 percent who view him in a favorable light.  Among Republicans, 44 percent view him unfavorably compared to 39 percent who have a favorable impression.

While Sanford’s numbers are abysmal, rumors about a possible comeback persist.

Why?  Because money talks … literally.

According to the latest filings at the S.C. State Ethics Commission, Sanford’s gubernatorial account (yes, the one from 2006) is sitting on $1.1 million – more than enough cash to embark on an image reclamation tour.  Various political groups affiliated with Sanford have another $200,000 squirreled away.

That’s more than enough money to be competitive …

And for all his faults as a candidate and executive, Sanford is a money-raising machine – with one helluva Rolodex.

He’s also gotten engaged to his former mistress – removing some of the stigma associated with his indiscretion.

One question that remains unanswered at this point is whether Sanford would challenge Haley in a Republican primary or go after her in a general election.  We’ve heard rumors that both scenarios are being actively considered by the former governor.

We’ve also heard that if Haley appoints Jenny Sanford to the U.S. Senate seat being vacated by Jim DeMint, that the former governor might be more inclined to run as an independent in 2014 – exacting revenge against Haley for elevating his ex-wife to such a prominent position.